In a nutshell: The 9.7 inch iPad Pro offers the same high performance as the full-size Pro, but in a more affordable and portable form. It's more capable than an iPad Air 2, with the new A9X processor, 32GB of RAM, and the 12 megapixel iSight camera borrowed from the iPhone 6s. It's not cheap by any standards, but is a very powerful and capable computing device.

The iPad Pro 9.7 inch is a scaled-down version of the full-sized iPad Pro. It's smaller, thinner, lighter and cheaper. The RAM has been reduced from a massive 4GB down to a more modest 2GB, but it's still a very powerful tablet. At the same time, the camera has been improved, so on balance, the iPad Pro 9.7 is less of a workhorse than the original, but is more consumer-friendly.

The 9.7 inch screen feels small after coming from the 12.9 inch version, but it's the same size as the iPad Air 2, and has the same sharp 264ppi resolution. The screen technology has been developed further, and is now a True Tone display, with more accurate colour fidelity, which is a bonus for anyone wanting to use the iPad for photography or graphics work. As always, it's a superbly responsive screen.

The iPad Pro 9.7 has exactly the same dimensions and weight as the iPad Air 2, making it ultrathin, and very easy to handle. The home button includes the usual fingerprint identity sensor, which can be used to unlock the device and to authenticate Apple Pay and purchases from iTunes and the App Store. There are 4 speakers built into the unibody, compared with twin speakers in the iPad Air 2. As expected, build quality is 100%.

However, we're a bit irked by the camera bump that makes the lens stick a couple of millimetres out of the back.

The 9.7-inch version of the Pro comes in a choice of Silver, Gold, Rose Gold or Space Gray. Matching covers are available, as well as a Smart Keyboard cover and an Apple Pencil. 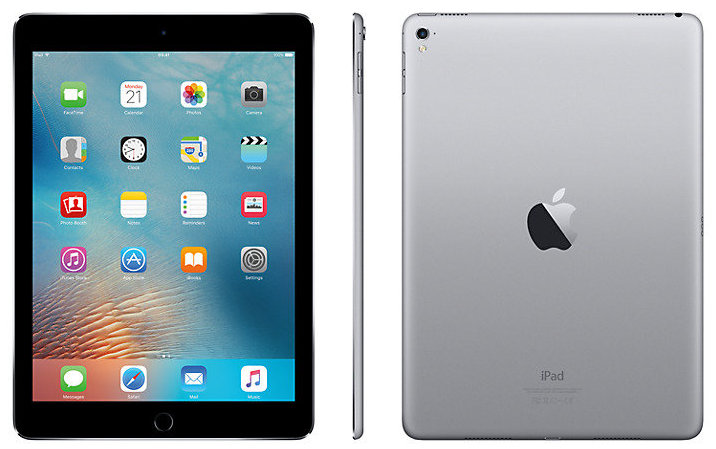 The A9X processor in the iPad Pro is some 70% faster than the A8X in the Air 2, both for processing and graphics performance. That makes the Pro very powerful, even though the 9.7 inch version has had the RAM cut down to 2GB, compared with 4GB on the 12.9 inch model. You'll notice the difference the smaller RAM makes when multitasking, or switching between tabs in the Safari web browser.

The tablet comes in 32GB, 128GB and 256GB options, although the price rises steeply as memory increases. Choosing the right memory option is always tricky with Apple products, but for most people, 32GB will probably be adequate. It's twice what you get with the entry-level version of the iPad Air 2.

Although in most respects, the 9.7 inch and 12.9 inch iPad Pros are the same, the smaller version has significantly uprated cameras.

The rear-facing iSight camera now has a 12 megapixel BSI sensor, which appears to be the same as in the iPhone 6s. It's probably the best camera we've ever seen on a tablet, with autofocus and auto HDR mode included. It can record 4K video with continuous autofocus, and includes support for slow-motion capture at HD resolution.

The front FaceTime camera has also been upgraded from 1.2 megapixels to 5 megapixels, although it can still only capture 720p HD video. It does now feature a Retina flash, like the iPhone 6s. There are twin microphones for stereo audio recording.

The tablet comes in a choice of Wi-Fi-only and 4G versions. The 4G LTE version is the same size and weighs just a few grams more, but it's substantially more expensive to buy, and you'll need to factor in a 4G data provider too.

The tablet also has Bluetooth 4.2, a Lightning connector and a 3.5mm stereo headphone jack. You'll also find a Smart Connector for connecting to the Smart Keyboard.

The smaller Pro has a much smaller battery than the full-sized version - slightly smaller even than the iPad Air 2 - but Apple quotes the same 10 hours of usage time for all three devices.

The original iPad Pro was an impressive device, with the potential to replace a MacBook. This smaller version has all the features that made the original so impressive, but in a smaller form factor. While serious users will prefer the larger screen of the Pro 12.9, more casual users will prefer the more compact form of the 10-inch Pro. It's a good replacement for the iPad Air 2, being the same physically, but faster, with more memory and a better camera.

Apple is throwing out a lot of choice in tablets these days, and it can be hard to pick the right one. Cost is always a factor. With a price of around £500, the iPad Pro 9.7 is very much a high-end tablet, but it's powerful enough to last for a good few years before it becomes outdated.

Reviewed by Trev from Uk on 8th May 2016
This is my 3rd iPad over the years and it is by far the best.

I wish it had 4gb of ram and it is really expensive but other than that, I cannot complain.

I only use my laptop for writing and the tablet for everything else.

You won't regret it.
Rating: