One thing is new - there's a different choice of colours. Space Grey has gone, and in its place comes not just one black, but two different blacks. Available in Jet Black, Black, Silver, Gold and Rose Gold, it's the Jet Black gloss finish that Apple wants everyone to see. Coincidentally, the Jet Black version is only available in the more expensive 128GB/256GB memory options - more about this later. It's also a magnet for scuffs and scratches, by the way. You could hide it in a protective case, but then why choose the shiny version in the first place? 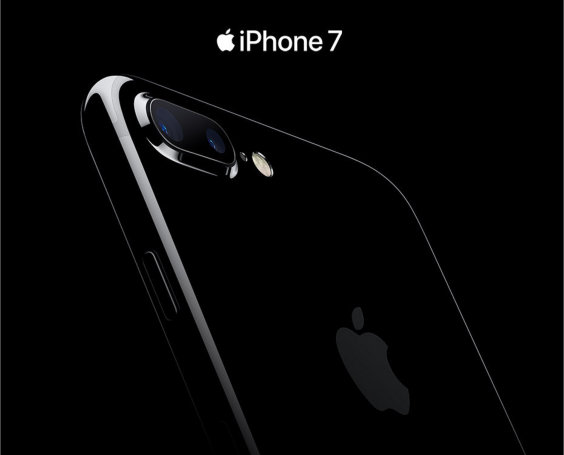 The iPhone 7 remains a compact phone, and is a good size to handle, unlike the monster dimensions that nearly all Android phones have grown to. It's lighter than most phones too, but not that light. And it's ultraslim, at just 7mm thick. The ergonomics are superb.

Another new feature is that it's splash-, water- and dust-resistant. You can now take your phone into the bath, although we wouldn't recommend it, and be certain never to take it swimming in salt water.

The screen is exactly the same size and resolution as the iPhone 6s and 6. The 4.7 inch screen feels small by modern standards, but is necessary given the overall compact size of the phone. The 326ppi pixel density feels more and more entry-level every year Apple persists with it, and we'd have liked an upgrade to a Full HD screen a couple of years ago. Instead, Apple has given us a screen with a wide colour gamut, which most users won't notice, and an increase in peak brightness, when the screen was already bright enough. What was really needed was an upgrade to Full HD and ideally a shift to AMOLED technology, like Samsung has been using for many years. Perhaps the iPhone 7s will give us that next year.

3D Touch is still here, even though we still don't really like it. And sadly, the circular home button is no longer a real button, but has become pressure-sensitive. Why, oh why? This was one of the features that we liked about the iPhone, and we suspect that a lot of other people did too. Try using the new iPhone wearing gloves and you'll quickly start to miss the old button too. The home button still incorporates a fingerprint sensor to unlock the phone.

One thing about iPhones is that they keep getting faster. The new A10 fusion chip is the fastest yet, although the RAM is still fixed at 2GB. In practice, it's hard to tell the difference the new chip makes. The iPhone 6s was already lightning fast, and apps seem to work just the same.

One thing that has changed for the better is that the 16GB memory option has been scrapped at last. 16GB has been too small for years, especially since the iPhone has no support for memory cards. 32GB is a much better starting option, although power users may still find it too restrictive. The other options are 128GB and a massive 256GB. Irritatingly, the "correct" 64GB option has been taken away.

As is the custom, a new iPhone heralds a new release of iOS. iOS 10 is quite a big upgrade, bringing in new versions of Messages, Maps, Photos and Siri. There's more integration of 3D Touch, and you can now wake up your phone to check notifications just by picking it up - handy if you're wearing gloves and that pesky home button won't respond.

Both the front and rear cameras have been upgraded.

While the main camera still has a relatively low 12 megapixel sensor, it now has a wider f/1.8 aperture that helps it to capture shots better in low lighting. The optical image stabilisation that was previously only available on the iPhone 6s Plus is now available in the iPhone 7, and that also helps with shooting in poor lighting conditions. The True Tone flash has been upgraded to use four LEDs. The iPhone 6s camera was already excellent, and these enhancements make it even better.

The optical image stabilisation is perhaps even more useful when it comes to shooting video, and the iPhone 7 does an excellent job of recording video at resolutions right up to 4K.

The front camera has been boosted from 5 to 7 megapixels and now incorporates digital image stabilisation and video recording up to 1080p HD.

Connectivity - the headphone jack is no more

The iPhone 7 supports a wide range of LTE bands, plus fast Wi-Fi and Bluetooth 4.2. NFC is present, and GPS and GLONASS positioning are available.

But what has happened to the 3.5mm headphone jack? It's gone. Instead, Apple provides EarPods that plug into the Lightning Connector. There's also a Lightning to 3.5mm adapter. The reason why Apple has done this is debatable, and we're not going to get involved in that discussion. One thing that we can safely say is that removing the 3.5mm jack in no way increases the utility of the phone. 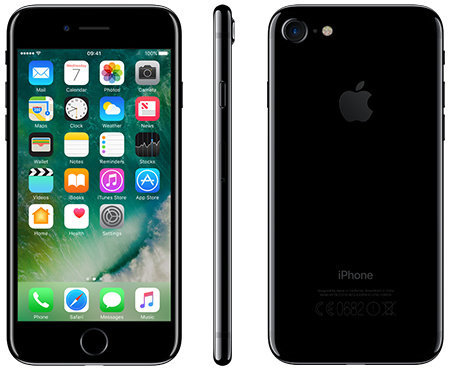 The iPhone 7 has a slightly larger 1960mAh battery compared with the 1715mAh of the iPhone 6s. The new Fusion chip also uses less power than the previous A9 chip. The result is that you can expect to get a couple of hours more use from your phone between charges - up to 12 hours of internet use. That's an improvement that all users will welcome.

Reviewing iPhones is a frustrating business. For while iPhones are undoubtedly beautiful shiny things, and iOS is easier to use than Android, there's always a list of things we don't like.

Let's start with the positives. The improved camera and longer battery life are clear wins. The new choice of colours is cool, even if the Jet Black scratches so easily. Water-resistance is a feature that we'll happily say yes to, and the 32GB starting memory is definitely a good move.

There are things Apple has given us that we didn't want. The brighter screen and the faster processor don't make any difference. We really wanted a Full HD AMOLED screen and expandable memory.

We certainly didn't want the home button to lose its click, and the loss of the headphone jack benefits consumers in no way whatsoever.

So, you win some, you lose some.

But wait. We didn't mention the price yet. If you buy the iPhone 7 on contract, you're looking at £50 per month over two years. We think that's an insane amount of money to pay for a phone, and that's for the entry-level model.

Reviewed by Phone Guy from UK on 6th Jan 2018
Ok, the iPhone 7 is from 2016 but it is still an amazing phone at the start of 2018. I still have my iPhone SE somewhere which is an amazing smaller device but having big-ish hands it was sometimes a pain when bashing out a lot of emails through the day. The wife has a iPhone 6 which is now at the end of its life with a badly cracked screen and terrible battery life which we now know causes iOS to slow down to a snails pace.

I’m a phone junky. I like technology. I’ve had all the iPhones except the latest 8 and X models. There is a reason for not getting these which would take me to long to explain and I’m here to review the 7.

In my opinion, what makes the series of iPhones so good is iOS. It’s simple, easy to use and Is more secure than Android.

The tech inside the 7 is good and gets the job done. It’s fast. Photos are very decent. Enough said really. Battery life is good.

In 2018 the 7 is still a good buy. Unless apple deliveraty make the phone slow down then it’ll be a good device for a few more years. I just got mine so the battery lifespan should go as far as 2020. My wife’s 6 from 2014 is now 3 years old. If we got a new battery for it I’m sure it’d last another year or so.

Other makes/models and OS devices don’t have the benefit of build their own OS and devices. This is why the iPhone is unique.
Rating:

Reviewed by ray from United Kingdom on 28th Oct 2016
Just got hold of my iphone 7 and wow what a device. Had the iphone 5s so thought i would treat my self. So fast and the sound quality from the speakers as also brilliant. Cant wait to really get into all the apps and settings, im very happy with it.
Rating:

Reviewed by Darren from United Kingdom on 29th Sep 2016
The new iPhone 7 is fantastic blazing fast performance battery life is lasting longer and what pain-free to have a 32 GB as the base storage even know a small amount is been taken up by the OS had to delete the pre-installed Apps that came with it such as garage band although I'm a music lover I would hardly use this app as it takes up so much space I currently have 50 something apps and still have 22 GB remaining Apple are going in the right direction with their devices but I still find it hard to believe that they don't come with OLED display technology I think 2017 is going to be the year for that but all in all thumbs up for the iPhone.
Rating:

Reviewed by Chris from England on 23rd Sep 2016
Got iphone 7 128Gb in black. Works fine except for one major drawback (at least for me). I turned off Siri, which automatically turns on Voice Control. Whenever I press the home button slightly too hard (very easy to do on the iphone 7), I get the unwanted voice control. Apple tells me you can't turn off both Siri and Voice Control, which seems a major inconvenience in IOS 10. I hope Apple provides a fix for this quickly, as it is spoiling my enjoyment of the phone. Hence my only awarding four stars rather than five.
Rating:

Reviewed by ian from uk on 21st Sep 2016
Seriously. everyone needs to grow up. making such a fuss of having no headphone jack. this time next year all phones will be the same. technology is moving on all the time. and frankly the less leads the better.
It is a beautiful phone with beautiful features. but if a headphone jack is really such a big deal to you then go buy a retro sony walkman.
Rating:

Reviewed by Tris from U.K. on 20th Sep 2016
Managed to get my i7 plus and my wife's i7 on launch day. I've been setting up and generally messing around with both phones but I've come to some conclusions over the i7. Yes it's faster ( not much). Yes it's great that it starts at 32GB now. Colour options are good. Screen is slightly better ( but you have to have the 6s side by side to tell). Loosing the headphone jack does give improved audio in my opinion ( the wife can't tell). Price as always is astronomical. There just no point in going into specs on the i7. It really does nothing that much better then the already pretty good 6s. If you have a 6s then don't waste your money upgrading unless your desperate for one of the black versions. It really doesn't run much faster. The camera isn't notable over the 6s. The screen is not notable over the 6s either. The more notable revisions are on the i7 plus. Even the capasative home button isn't actually anything groundbreaking although it's obviously needed to achieve the water proofing. I think personally these phones are more about preparing iPhone users for the major design changes coming to the i8 next year. If you on 2yr plus gen then yes buy it. If your still on last years then no. You will be disappointed very likely. The reason I upgraded for the i7 plus was for the camera for my work. It wouldn't have been worth it in the i7.
Rating: