We feel pity for those poor phone designers faced with the problem of naming their latest products. How can they name the follow-up to the P8 Lite, when the P9 Lite already exists? Easy - add the year to the name, and call it the P8 Lite 2017! Samsung started this trend with their Galaxy A3 2016, and it looks like it's here to stay.

Confusion abounds, especially when the P8 Lite 2017 is almost the same spec-for-spec as the P9 Lite. But the P8 Lite sells for rather less, making it an excellent choice of mid-range phone.

It's certainly got the looks, with a smooth, ultraslim design and a big screen. The IPS display is a highlight of the device, with its sharp and super-bright performance. The screen resolution is 1920 x 1080 pixels, giving it a very high 424 ppi pixel density.

The gloss rear of the phone features a next generation fingerprint sensor, that's lightning fast in use.

The phone feels quite heavy - largely, we suspect, due to the enhanced battery size - but that adds to the quality feel. 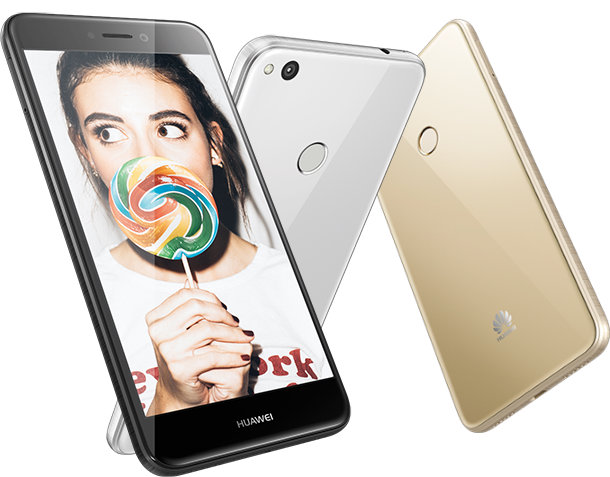 The original P8 Lite had a relatively underpowered processor, but the 2017 edition has been given a significant performance boost with an 8-core Kirin 655 processor running at up to 2.1GHz. With 3GB of RAM available, it doesn't slow significantly when pushed hard, and Huawei has made tweaks to the file system management, so apps open noticeably quicker than before. For the money, this is a fast beast.

16GB of storage is adequate for the job, and you can expand this by up to 256GB using the microSD card slot.

The P8 Lite 2017 runs Android 7 Nougat, with the latest version of Huawei's Emotion UI on top. The Emotion UI isn't to everyone's taste, but many people do like it, and this latest version runs fast without hogging system resources.

The rear camera is a 12 megapixel BSI camera with an enlarged sensor for better low-light performance. It's a very good performer for a mid-range phone, with fast and accurate focussing, even in low lighting. It can record video at 1080p HD resolution.

The front 8 megapixel camera has also been upgraded and is good for selfies.

The P8 Lite 2017 brings in the usual connectivity - 4G, Wi-Fi, Bluetooth, NFC, USB 2.0 and assisted GPS/Glonass positioning. The 3.5mm headphone connection lets you appreciate the 3D audio feature, giving you a richer and wider sound experience than many rival phones.

Our main complaint with the original P8 Lite was its weedy battery. The 2017 version has a much bigger 3,000mAh battery, which eliminates the problems we experienced with the previous version. The P8 Lite 2017 has better than average performance in its class.

We're not keen on the clumsy name of the P8 Lite 2017, but we like the phone itself very much. It's a nice-looking device, with a good feel, and solid all-round performance. There's not much to dislike, although Android purists may find the UI an issue. But the hardware itself is top drawer, from the Full HD screen to the 8-core processor, to the HDR camera and battery, all's good.

Reviewed by Steve from UK on 29th Oct 2017
I've had this phone for about a month now, & it's excellent- fast, easy to use & with a long lasting battery & quick charge up. Got mine for £150 from Carphone Warehouse. Huawei will become the new Samsung at this rate, as they're making phones of equal quility to Samsung at a fraction of the price. One thing I have to say though, is that the battery seems to need to 'burn in' to reach it's full potential- I found it drained quite quickly on the first 2-3 charges. Since then it's kept its charge much longer.
Rating:

Reviewed by Mr Jones from UK on 15th Sep 2017
I wish to add an update to my previous review/comments.

I am totally pleased with this smartphone. I honestly haven't had any issues with it at all.

Battery life is great. I use Bluetooth headphones all day and have is it fairly heavily for work and please and have not once needed to recharge during the day.

It is quick with the day to day tasks. Slows a little when pushed with big games, not that I play games on it.

For my needs I would say it's better than any high costing flagship device.
Rating:

Reviewed by Mr Jones from UK on 9th Sep 2017
I've been a long-term customer of Apple but due to various reasons I have decided to turn to Android for my next smartphone. The smartphone market is rife with good/high quality devices for little money in comparison to higher end devices.

Having parted with an iPhone 6s 64gb model for the Huawei P8 lite I wish to provide my review and experience in purchasing it.

My local phone store is well stocked on the latest devices and will always help me out if I need assistance with all sorts of issues. When I asked to trade my 6s in and decided to get the P8 lite their faces could hide the shock of such a request. They had to ask me several times if I was sure. They even said I was crazy. I guess they are Apple mad.

The P8 lite is an amazing phone. Why? It's to do with the cost and specs. There are other phones on the market, such as the LG G6 which has an RRP of £550 (I think). The LG G6 specs are no better than the P8 lite IMHO. Twin cameras don't really appeal to me and is a gimmick.

Having had the P8 lite for a few days I can compare it to my 6s with no issue of saying that the P8 lite is better.

Better because I can do more and with ease. I use my phones for work and I send lots of emails. I have to send and receive multiple formats of attachments. With iPhones you have to have loads of apps to be able to view various formats. With Android I can view the attachments easier. I can copy from one app to another easier. There are lots of reasons why Android is better than the iPhone. The P8 lite works flawlessly and hasn't failed me yet in what I do daily. I don't play games so having a super fast CPU is pointless. The Kirin 655 is perfectly balanced for everyday use and won't let you down. Compared to a Snapdragon of similar specs the Kirin is not inferior. It's just Huawei's own CPU.

Negatives, I can't think of one.

Positives, everything about the device is good.

If you seek a new device and want to save a load of cash please consider Huawei. They produce great devices for a lot less than others and have great specs to match.
Rating:

Reviewed by Redfitz from United Kingdom on 10th May 2017
I bought this after selling my p9 lite and its a little faster but not huge amount the processer is 655 not 855 its still quick but it's very slippery to hold so be careful I've dropped mine luckily on carpet a year great phone for £180 in carphone warehouse but think it now gone back up to £229.
Rating: