Why do manufacturers sometimes give their phones such confusing names? We don't know. Huawei named this phone the Y360, but they also named it the Y3. Duh. But whichever name you prefer, it's well worth a look if your budget is really tight.

The Huawei Y3 (or Y360) is an entry-level phone, but you'd never guess that from its build quality. It has a very nice polycarbonate construction, with a smooth finish, and feels really solid and of high quality. It's a compact phone that's easily pocketable, and is extremely light in weight.

The phone comes in a choice of colours - Black, White, Red, and Blue. If all entry-level smartphones could look and feel this good, we'd be happy bunnies. 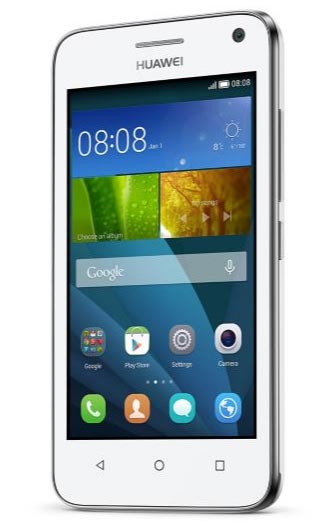 The 4-inch screen is smaller than most, but it's not too small for navigating menus and apps, and browsing photos, web pages, etc. With a resolution of 480 x 800 pixels, it's not the sharpest screen around, but it's by no means the worst.

It's no surprise to find that this entry-level phone has limited capabilities. The processor is quad-core, but not very fast, and with a paltry 512MB of RAM, it can be laggy, especially when opening apps, and also when running apps that make demands on system resources. If all you do is play simple games, check emails and social media, and browse mobile-friendly websites, you'll be OK, but don't expect to do anything more advanced.

The 4GB of flash memory is limiting, but you can expand the storage by up to 32GB with a microSD card for storing music, photos and videos.

The rear camera is a simple fixed focus 5 megapixel affair. It's OK under good lighting conditions, but can't really handle poor lighting. The 2 megapixel front camera is even more basic, but can capture quick selfies.

This isn't a 4G phone, but it's compatible with 2G and 3G networks, and also has Wi-Fi, Bluetooth, USB and a headphone jack.

The battery life of the Y3 isn't too shabby. The 1730mAh may be small, but it's adequate to power a phone of this type. With moderate use it shouldn't cause any real concerns. However, if you use it continually you might be heading for disappointment.

It would be easy to dismiss a phone this cheap, but the Huawei Y360 offers more than you might expect. The build quality is a real surprise, and it's a lovely phone to handle, especially if you have smaller hands or tight jeans! The processing power is limited, but if you don't push it too hard, you'll be able to play games and check out your facebook feed without too many tears. The memory, although small, can be expanded at very little cost, and the camera is capable of capturing cheerful snaps as long as it's not too dark. The battery won't let you down either.

All things considered, we're quite pleased with this little phone, even though we still don't really know what to call it.

There really aren't many good alternatives on offer for less than £100, but you might want to consider the excellent Sony Xperia E4 3G.

Can I upgrade my Huawei Y360 android operating system to 5 and above?

Asked by Martin Brooker from England on 11th Sep 2018

Is the Huwaei Y3 (Y360) capable of voice recognition?

Asked by Dodi Lannester from Kenya on 4th Aug 2017

Reviewed by gloria from uk on 13th Feb 2018
Very annoying phone as you have to turn off updates in google play as phone runs out of memory. Preloaded aps take nearly all of memory and they cannot be transferred to moveable card. Cant load any new apps due to limited internal storage and have to visit actual websites. If you only use it for emails or photos on sd card should be ok. Phone went back to factory settings 3 times wiping all data off. Cant back up due to limited memory.
Rating:

Reviewed by lindie from gauteng on 19th Nov 2017
I love this phone. It is a very good phone.People can buy this phone.
Rating:

Reviewed by Bob from Ireland on 11th Sep 2017
This phone is hands down the most infuriating piece of technology I've ever had the misfortune of using. The internet hardly ever works, even when there is full coverage.
It takes near to 30 seconds to open applications or news articles.
It spontaneously turns off.
Applications spontaneously close.

This phone is only useful for the same functionalities as a block phone, except it is slower and more soul crushing than a typical block phone.
Rating:

Reviewed by carren from Kenya on 7th Jun 2017
Y3 is good anyway but mine is terrible when it comes to internet connection...very very slow irrespective of the fact that it's on 3G setting and much bundles available...am frustrated!!
Rating:

Reviewed by Stephen Lamesh from Kenya on 6th Jan 2017
I used it befor i changed to tecno.but for real i exprianced real enjoyable when i had it...because the rate of using buddle is low but fast running to any internet loading.am heading to it coz its real economical indroid smat4n...
Rating:

Reviewed by Angel from United Kingdom on 8th Dec 2016
Install Facebook message and eBay then any thing else it wanted uninstall.
Connection was rubbish to WiFi and 3.
Touch screen was slapping the keys to get it working.
I personally will not buy this make at all now. First bite.
Also over heats a lot with WiFi on and eats power like a joke.
A chucked together phone for one you will bin, maybe OK for someone who needs a ditchable phone.
Rating:

Reviewed by Lorna from England on 3rd Dec 2016
This phone is rubbish always say storage full can download any apps like 2 apps one time to many system app this phone is usless.
Rating:

Reviewed by DAVE from UK on 7th Nov 2016
I have a Y300 which I beleive is the forunner to this model the specs are much the same, the camera is described as fixed focus mine is not you can zoom with auto focus so if true would seem to be a backward step, the other difference is the 360 quad 4 processor against the twin core on the Y300. Again low light photos amaze me sometimes. Having said all that I have just seen the latest 360 in asda for £46. Beat that!
Rating:

Reviewed by Fausta from Italy on 13th Aug 2016
The phone is small but i feel like it needs more work but if it doesn work for you try using samsung galaxy j3 or j1.
Rating:

Reviewed by FRANK from KENYA on 9th Mar 2016
EXCELLENT.
Rating:

Reviewed by dave from UK on 8th Mar 2016
First touch screen mobile for me to use - so far no complaints. This mobile does what it is supposed to. The one feature that stands out is the size & weight, having been used to the smaller push button mobiles I was looking for a small Android touch phone for internet use. The instruction guide is limited and I was told "with an android mobile one needs to play around to seek its capabilities". It is getting easier to use the more I use it.
Rating:

Reply by David from England on 12th Mar 2017
Where is the user manual?

Reviewed by Muhammad Aslam Pasha from India on 15th Feb 2016
👌phone was perfect but one more thik is not good that is RAM☺....
Rating:

Reviewed by clifford from jamaica on 30th Jan 2016
This is my first smartphone, I am enjoying using it. accesses the internet fairly quickly.
Rating:

Reviewed by John Jantzen from Australia on 5th Jan 2016
I think you have summed up this phone realistically. I bought mine a month ago, after reading this test and a YouTube review from the W.I. and I'm glad I took notice of these reviews, as I love it! I must admit it is my first smartphone, the cost of these devices and their size being a little off-putting. The small size of the Y360, its low price and good performance make excellent sense to me and suits the degree of investment I would want to make in this technology. It's a well built gadget, too! Charges quickly and lasts a long time on standby. I would definitely buy a Huawei again!
Great value for money and very usable. Costs about AU$100 here, so very comparable to UK price.
Rating:

Reviewed by Erickk Omondi from Kenya on 24th Dec 2015
love this device,its a smart smartphone. With 3G you can surf the internet very fast, clear images and pictures. a good one.
Rating:

Reviewed by Edward from U.K. on 21st Dec 2015
Difficulty in sending text messages and phoning contacts from the address book.
not a phone for the novice or technology beginner.
Rating:

Reply by Dain from Uk on 8th Feb 2016
My partner has this phone as a second phone it is very good for its price and speck have you thought it might be your network you are on. I was on 3 network it is so slow it carries Id from carphone werhouse and others as well so to slow for 3g phones some times not the phone.its a good phone!?