The Humax HDR-1100S replaces the HDR-1000S satellite box. It's a twin tuner Freesat receiver and recorder with internet and Catch-up TV services too.

To use the box, you'll need a satellite dish to receive Freesat signals. Most Freesat users are probably ex-Sky customers with a dish already in place. In this case, you can simply replace your Sky box with the Humax and start watching. There's no need to adjust the Sky dish, since Freesat uses the same satellite as Sky. If you don't already have a satellite dish in place then you'll need to have one installed.

There are two inputs from the satellite dish, so you can watch one programme while recording another, or record two programmes simultaneously (while also watching a recorded programme or catch-up TV).

To access Catch-up TV, you'll need to connect the box to the internet as well, and this is made simple by the inclusion of Wi-Fi and ethernet in the box. The receiver will then also act as a media centre, able to play music and video from connected devices in your home.

In addition, there are 2 USB ports for plugging in USB-enabled devices such as cameras or memory sticks.

Freesat now includes more than 200 free TV and radio channels with 11 HD channels. The Freesat electronic programme guide (EPG) called Freetime is very easy to use, and lets you find programmes to watch or record very quickly. You can use the series link feature to record an entire series.

As well as watching live TV, the box also functions as a PVR (personal video recorder), so you can pause and rewind live TV and record programmes on the hard disk. The box is available in a choice of three disk sizes: 500GB, 1TB or 2TB. The largest of these is enough to record 1,000 hours of HD content.

The HDR-1100S includes Freesat's new catch-up TV service. This adds the BBC iPlayer, ITV Player, All 4 & Demand 5 to the Freetime EPG, so you can roll backwards on selected channels to access the past week's programmes via a broadband internet connection. The EPG also includes Showcase, which is Freesat's pick of the week's highlights, and is a handy way to make sure you don't miss anything. 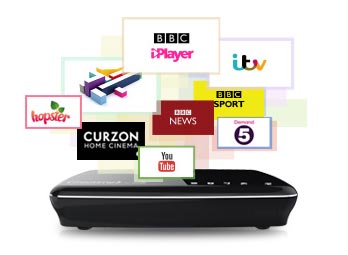 The Freesat App for iOS, Android and Amazon Fire turns your smartphone or tablet into a remote control, and even lets you record programmes when you're away from home.

The HDR-1100S is a very compact, well-priced and well-featured Freesat box. With catch-up TV, built-in Wi-Fi and a choice of disk space, it offers everything we want from a Freesat box.

Can this digital player & recorder be used without a satellite dish?

Asked by Barbara scarff from England on 9th Jul 2017

Can 1100S be used in Europe + is on demand also available?