The LG 49UH668V is a mid-range model in LG's UHD TV range for 2016, with mid-range looks. We found its appearance to be quite chunky overall, with a thick metal crescent-shaped stand that's quite dominating. The brushed metal bezel surrounding the screen matches the stand, and the chassis of the TV is very deep, measuring almost 8cm at its thickest point. It's a bulky TV, and quite wobbly, despite the heavy-duty appearance of the stand.

The LG 49UH668V is a UHD (4K) TV with High Dynamic Range (HDR) compatibility. In fact, it's a HDR Pro TV, which is LG's name for the HDR10 standard. That means this screen uses 10-bit colour for up to 1 billion colours - better than many cheaper so-called HDR TVs. The screen certainly produces bright images with vivid colours.

Unlike Samsung, Sony and Panasonic, LG continues to use IPS screens in its LED TVs. IPS screens are good at producing bright colours with wide viewing angles, and a lot of people like the way they look. There's no doubt that the screen "pops" when viewing well-lit scenes. But IPS panels suffer from two intrinsic problems - they are slow, and they can't reach the deep black levels of rival screens.

There isn't a lot to be done about the slow native response of this screen, although clever motion compensation algorithms can go some way, at the expense of introducing an artificially-smooth "soap opera" effect. We found that like most LG LED TVs, the UH668V shows motion blur that's often noticeable in fast-moving scenes.

The second problem - low contrast - has been addressed by LG with a local dimming backlighting system. This certainly solves the problem of black levels, enabling the TV to reach very deep blacks, as well as very bright colours. But the system aggressively kills off shadow detail, producing an effect similar to turning the contrast levels up too high on an old-fashioned CRT television.

So, while the TV has plenty of headline-grabbing features that suggest top picture quality (UHD, HDR10, ULTRA Luminance and local dimming), and is superficially very attention-grabbing, in actual use the problems of motion blur and loss of shadow detail can be problematic. 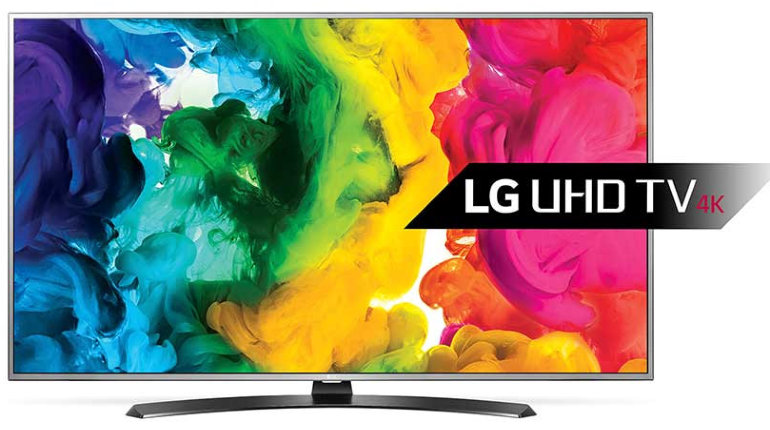 The UH668V has a typical mid-range sound system consisting of two 10W speakers with simulated surround sound. The Clear Voice III feature helps to make dialogue clear, but there's little in the way of sound effects in movies. A soundbar is definitely recommended as an additional accessory with this TV.

The TV uses LG's latest WebOS 3.0 operating system to provide a raft of Smart functionality. From the menu you can select channels, access catch-up TV and on-demand content, and install a range of apps. You can also control devices such as a Blu-Ray player or home cinema system from within the WebOS user interface.

The UH668V scores well for connectivity. In addition to 3 HDMI connections, digital audio output, a combined component/composite input, and a USB, the TV can connect to terrestrial (Freeview), cable and satellite sources. Smart networking is available via ethernet and built-in Wi-Fi, and Bluetooth support is also provided. The TV handles home networking with ease, using either DLNA networking or Miracast to display content from other devices in your home, including wireless display mirroring of a smartphone, tablet, or laptop.

The LG 49UH668V could make a decent option for a family TV. It's priced fairly for a 49-inch UHD TV, and HDR10 compatibility makes it future-proof. The wide viewing angles and good daylight brightness make it a versatile option for family viewing, and the excellent WebOS 3.0 Smart TV provides the essential catch-up TV services and streaming content from Amazon, Netflix, and YouTube that a modern family needs.

But the picture quality isn't as good as we'd like. Motion blur and the aggressive flattening of shadow detail are a problem once you become aware of them, and this isn't a recommended TV for watching films or sport.

At launch, the UH668V is priced at just under £1000. At S21, we don't think it's worth that much. We'd be more comfortable paying £800 for this TV. Better still, we'd widen our search and consider the outstanding Samsung KU6470 TV instead.

LG content store does not work in my country?

Asked by sunny from nepal on 10th Nov 2017
I bought this lg uh688v tv from uk. But the problem is lg content store does seem to be work in nepal. What is creating this problems.

Reviewed by Roderick from United Kingdom on 4th Mar 2017
I have owned this TV for a day and am totally in love with it. It's easy to set up and the remote works a treat it does take a little getting used to. I have seen other reviewers talk about the built in speaker quality but if you delve around in the settings and tune it to your room I don't think you will need a sound bar. All in all I am totally satisfied with the TV and the price I paid for it Well done LG.
Rating:

Reviewed by marius from UK on 12th Nov 2016
I've got the 55" version of this.
Image is BETTER then same-priced Samsung, Sony, Phillips. I am a Sony fan, but had to give it to LG for this TV.
Motion blur and shadow detail/Amoled screens are things you buy for a lot of money, so saying this is a medium TV just because it just happens not to be on par with 144 v-sync monitors (I've got one), is quite silly, I was expecting more from s21. The audio internals are indeed decent, but the built-in speakers are simply there to say the unit has speakers: the sound quality inside demands proper soundbar/speakers.
It took me a while to decide to buy this 55" model, got it for 799 and it's been passing all my subjective tests with flying colours. The next imaginable step up is only the 2000+ pounds models from Samsung, which doesn't fall into family TV category anymore, but pay-for-innovation category... and any TV requires stand-alone speakers, including those high-priced ones, so the speakers are not really a downside; even a 200£ stereo setup will simply transform your TV into something magical.
All of this is my personal opinion, ymmv, but whoever reads this: the image quality of this TV is beautiful, and to gain a bit more quality, you need to pay about double or more.
Thanks for reading,
Marius
Rating:

Reply by Loz from UK on 18th Nov 2016
Thank you Maruis.
Appreciate you taking the time to give an objective opinion.
Much appreciated, I think I will take the plunge.
Thanks,
Loz

Reply by Paul from United Kingdom on 2nd Jan 2017
Thanks for the review i will buy this and also put up a review when it arrives in a few days.