LG has had a good run in recent years with its stylish G3 and G4 handsets, incorporating innovative designs and high-end screens. The G5 is innovative too, but in a different way. For the G5, LG has dropped the curved screen and leather finish of the G4, as well as the rear-mounted controls, producing a phone that looks much more conventional. The innovative aspect of the G5 is that it's the first phone from a mainstream manufacturer to feature a modular design. More about this below.

On the face of it, the G5 is a much more conventional phone than the G4. The leather finish is gone, and in its place is an aluminium body. The funny thing though, is that it doesn't look like real aluminium. There are cheap phones that look expensive, but sadly the G5 is an expensive phone that looks cheap.

The volume rocker is located on the left edge of the phone, and in place of a power button, you'll find a combined power button and fingerprint sensor on the rear of the phone, just where your fingertip rests, rather like the Nexus 5X.

The phone is slim, measuring just 7.7 mm in thickness, but it's certainly large, with a big 5.3 inch screen, and fairly heavy too, weighing 159g. Whereas the G4 had very thin tapered edges, the G5 has a uniform thickness so it feels bulkier, although the corners are curved. But at least it's flat, so it fits into a pocket more easily than the G4.

The phone has a big 5.3 inch screen with an astonishingly high Quad HD resolution of 2560 x 1440 pixels, giving it an incredible pixel density of 554 ppi. The screen uses LG's IPS display technology, making it exceptionally bright and clear, but perhaps lacking the eye-popping saturation of Samsung's AMOLED screens. The display incorporates always-on functionality too, showing the time and date, and key notifications, even when the screen is off.

But the G5's unique feature is its modular design. The bottom section of the phone is removable, so you can easily swap a battery, but you can also swap it for a camera accessory. This offers better grip, dedicated camera buttons, and a bigger battery. It effectively turns the G5 into a hybrid phone-camera. It could be useful from time to time, perhaps, but if this is the G5's unique selling point, we don't rate its chances too highly. 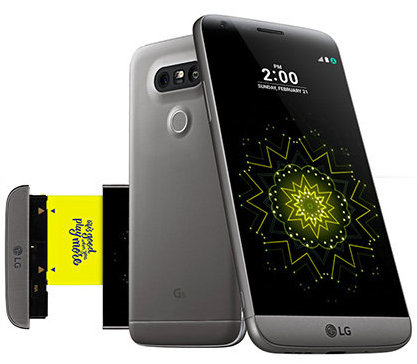 There's no doubt about it - the G5 is fast. LG has replaced the 6-core Snapdragon 808 processor in the G4 with a Snapdragon 820, which is quadcore but with a much faster clock speed. Running at 2.15GHz, this has a similar performance to the Samsung Galaxy S7. So the G5 does everything you need just as quickly as you could want. That includes playing demanding 3D games, as well as handling 4K video streaming and capture.

The massive 4GB of RAM helps a lot too, and the phone comes with a generous 32GB of built-in storage, with the option to add up to 200GB more with a microSD card slot.

The G5's cameras are largely the same as the G4's. In other words, the G5 is one of the best camera phones you can buy.

The rear 16 megapixel camera features BSI, HDR, fast autofocus, and optical image stabilisation, and is very capable. New for the G5 is a zoom-out (0.5x) option, for taking extra wide shots. This utilises a secondary 8 megapixel camera with a wide angle lens. The primary camera can zoom in by up to 8 times.

The camera can also record video in UHD (4K) resolution and in slow-motion.

The front camera has an 8 megapixel resolution. 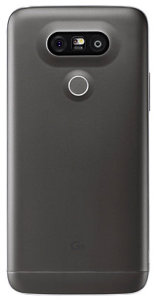 For a phone with a phablet-sized screen, the G5 has a surprisingly small battery, rated at 2,800mAh. LG quotes a talktime of 20 hours, but if you use the phone intensively, you might find that it doesn't survive a long day of work and play.

The battery is of course removable.

The modular design of the G5 is interesting in principle, but in reality it didn't grab us here at S21. It would be more useful if you could update the processor, or add more memory, but these are not features that the G5 offers.

Instead you get a rather ordinary, although nicely-styled phone, with a big Quad HD screen, a fast processor, and an excellent camera. The problem is that other manufacturers offer the same from their flagship phones, and often with special features that are more useful than a snap-on camera grip.

We'd skip the G5, and instead opt for the adrenaline-fuelled Samsung Galaxy S7 Edge with its curved screen, or perhaps the Sony Xperia Z5 Premium with its designer looks and massive feature list. Because that's the other problem with the LG G5 - it's very expensive, priced at close to £40 on Pay Monthly contracts.

An updated version of the G5, the G5 SE, includes twin rear cameras and a different processor, and costs less than the original.

The SE also swaps the Snapdragon 820 processor for a lighter Snapdragon 652 (Octa Core 1.8GHz), and a slightly smaller 3GB of RAM. Most users probably won't notice the difference, so the SE looks like a good option for most.

Reviewed by Clint Bestwood from UK on 6th May 2016
Had the phone for a week. Upgraded from Samsung S5. Marked improvement from that unit. After reading this review, have to admit I disagree with what's been said as this phone is the dogs. Who wants to be a sheep anyway. Think you're just paying for the name with Samsung. They could be turning into the new Apple.

Phone specs are excellent, can you really tell the difference anyway?? Camera is awesome, and as an amateur photographer it's got me tripping. None of these over heating issues that I had with my S5 (admittedly only been a week). I have been getting a full day from the battery (12-13 hours) but the fast charge thing is "tha bomb".....

If you don't wanna follow the crowd, this is your boy to back!!!
Rating:

Reviewed by ian cooke from uk on 8th Apr 2016
The LG G5 is a great phone. It is a bit strange to begin with as its apps are not accessed via an app button in the bottom control panal. The apps remain on screen like they do on an iphone. Once you get used to this, then the interface is the normal android. It has a great screen as has previous models G3 and G4. Lg seems to suffer with its name. People tend to think low end, but its specs are far from low end. If this was a Sony or a Samsung people would be raving about it. It really is a lovely phone with a great build. It is not expensive for the specs as mentioned in the s21 review. I would suggest value for money is away from the over hyped samsungs and sonys.
Rating: