It's been two whole years since LG released its Nexus 5 - one of our favourite Android phones ever. Now LG has released the Nexus 5X, updating the Nexus with Android Marshmallow and a groovy new fingerprint scanner. But is that really enough to show for two years of work? What has LG been doing all this time? Let's take a closer look.

2015 was the year Samsung finally made the move from plastic to metal, following the likes of Apple and HTC. At the top of the smartphone market, metal now seems to be a basic requirement. The Nexus 5X is still firmly wedded to plastic however. We don't have a problem with that actually, as plastic is a wonderful material that is flexible and lightweight, and so much cheaper than aircraft-grade aluminium. But we know that some people will have a problem with a plastic phone. Those people should look instead at the Nexus 6P.

The Nexus 5X, despite its plastic shell, feels like a solid product. It's a good size, lightweight, and reasonably slim, although not superslim. Gorilla Glass 3 protects the screen from scratches and bumps. We're not so keen on the fact that the rear camera sticks out at the back, however. The phone comes in a choice of Black, White or Ice Blue.

Also on the rear of the phone you'll find a conveniently-placed fingerprint scanner, located just where your index finger tends to rest. You can use the scanner to unlock the phone, access Play Store, Android Pay and apps. Although the location of the scanner means that you have to pick up the phone to unlock it, it's super-easy to use, once you've learned not to smudge the camera lens each time you reach for it. 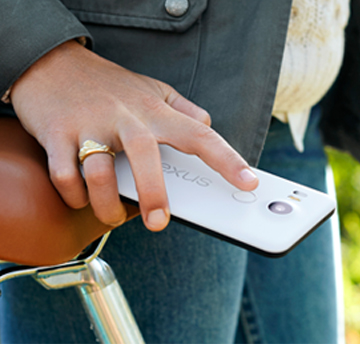 The screen hasn't really progressed since the Nexus 5 from 2013, but it's good enough for a phone that isn't priced right at the very top of the market. It measures 5.2 inches diagonally, and has a 1920 x 1080 pixel resolution, which is a match for many flagship phones, and is actually higher than the iPhone 6s. It's an IPS screen that offers decent brightness and colours, but isn't up there with the very best.

The Nexus 5X launches with Google's brand-new Marshmallow flavour of Android. Marshmallow's big new feature is "Now on Tap", which displays a card with helpful information when you press and hold the Home button. It's context-sensitive and aims to provide info about what's on screen. It's basically like "Google Now", but inside apps.

There are new battery management features, such as Doze and App Standby, which stop battery wastage, especially in standby. You now have much more control over permissions for apps, so you can stop them accessing your contacts, etc, if you don't trust them. Marshmallow also supports USB Type-C, which provides faster charging, and enables the Nexus 5X to include a USB Type-C connection.

One advantage in choosing the Nexus is that it will receive the very latest Android updates as soon as they become available.

The Nexus 5X comes with Qualcomm's Snapdragon 808 processor, as used on the LG G4. This is 64-bit 6-core processor running at a moderate 1.8GHz. It's not as fast as high-end processors, but at least it avoids the over-heating problems that have become an issue with phones like the Sony Z3+. The RAM is a moderate 2GB, which is less than the LG G4.

The phones comes in a choice of 16GB or 32GB storage. Neither has expandable memory, which we feel is a major error on LG's part. 16GB will fill up in no time, and even 32GB runs the risk of filling up during a 2-year contract, leading to heartache and misery. Don't buy the 16GB version, and be very careful before opting for the 32GB version. Neither may be adequate.

The phone comes with a 12.3 megapixel rear camera and a 5 megapixel front camera.

The main rear-facing camera has a dual LED flash, HDR mode, fast autofocus and UHD (4K) video recording. It's an excellent camera - not a match for the likes of the iPhone 6s or Galaxy s6, but very competent. The same camera is used in the more expensive Nexus 6P.

The front camera is just right for selfies or video chat, and can record at 1080p resolution.

The Nexus 5X is a 4G phone supporting a wide range of LTE bands. It's also compatible with 3G and 2G networks, with support for HSPA.

The Nexus 5X has a larger battery than the old Nexus 5, but it also has a bigger screen and a 6-core processor. Continuous use will drain the battery in less than 12 hours, and heavy users may struggle to make it through a full day.

The phone does have a secret weapon however - super-fast charging via USB Type-C, which will recharge your phone in much less time than a conventional charger. It's good that the phone has this feature, as you may need to use it!

Conclusion - not as good as the first Nexus 5

We probably shouldn't do this, but we can't help comparing the Nexus 5X with the original Nexus 5 of 2013. That phone registered a "wow" from us, whereas this one gets an "OK."

Let's examine the phone on its own merits. It's a nicely-sized, lightweight phone with a good screen. The fingerprint scanner on the back is a nice addition. It includes the all-new Google Marshmallow, and has a fast hexacore processor. The camera is good, and it incorporates the new USB Type-C fast charging. So there's lots to like here.

The problem is that even the 32GB version might prove to be too small. We're not too happy about the battery life either. So, although the Nexus 5X is a good phone with some nice features, it's not one that we'd recommend. There are better phones for the same price, including the superb Sony Xperia Z3.

Reviewed by Chris Wyatt from UK on 2nd May 2017
After the Nexus 5 - this phone :Nexus 5X disappointed.The lack of a micro SD card option meant that storage was poor especially for music files downloaded to be played on Google Music.However having paid £350 for this phone not long after launch and then seen the price drop on popular shopping sites like Amazon to around £250,the greatest disappointment has been the battery performance which began to fail after 9 months or so.Heating gradually increased both on discharge and charge and I have to report that only after 14 months of use - the Nexus 5X went suddenly into a boot-loop with what must be a component failure.The only option was to chuck it.Appalling! While it was nice to have the latest upgrades from Google,this early failure is a costly disappointment matched only by this phone's predecessor an HTC One Max which also went not a boot-loop after just 18 months.Embedded batteries are a menace & I notice that what must be one of the world's best selling phones - the Moto G series 5 - has reverted to a removable battery.£600 "flag-ship" phones with embedded batteries and the new "fast-charging" should be considered as a purchase with great caution.
Rating:

Reviewed by Lewis from UK on 16th Jan 2016
Having exchanged a Galaxy S6 for the Nexus 5X due to a really strange issue that Carphone Warehouse couldn't explain. I'll explain if asked.

I've had the Nexus 5X enough time to offer my comments and give a brief review. I disagree with S21's decision to give it 4 out of 5. Storage and battery life are on par with other phones such as iPhone 6/6s, Galaxy S6 and plenty others.

The battery is smaller but the processor demands less power than an Octa-core. The screen is HD but not QHD so uses less power. The time I had with the Galaxy S6 tells me the Nexus 5X provides better battery life. The wife has a iPhone 6 and it uses power quicker than the Nexus 5X.

Memory/user storage. I have the 32GB version as I do feel the 16GB is to small. I back all photos and documents to the cloud (OneDrive), so once photos are backed up I delete them. I have done this for years. I managed for years with 16GB iPhones 4/4S/5/5S etc.

I use a specialised app for work (job reports). It runs a little slow on my works iPhone 5 and my spare Moto G 2015. When I ran it on the Galaxy S6 it was painfully laggy. This highlighted an issue with the Galaxy S6, it might have been a one off but I doubt it. I now run this app on the Nexus 5X and it runs smoothly and quickly. High specs doubt always make a good phone.

The fingerprint scanner is far quicker than the iPhone 6 and 6S (tried a friends).

Build quality, its plastic but this isn't a negative. I prefer plastic. It can flex rather than bend like metal phones.

Sound quality. It doesn't have stereo speakers, so what. It's good enough for calls and the odd YouTube video.

It makes calls and send texts, emails as all phones can.

Quick charging means from 10% to 100% it takes about 1 hour. A slightly smaller battery than high end flagships doesn't matter and as I find battery life very good this is a big bonus.

The biggest bonus is Marshmallow. Android is finally (in my eyes) the best OS out there. I use to be an iOS fan for years but had to pay a high price for it each time.

Cost to feature - this phone is superb.

Do I have any negatives? Only one. With Cyanogenmkd CM12 (on my Moto G 2015) I can disable the volume keys altering the ringtone volume. I want this feature as standard. It is missing from Marshmallow. I may flash CM13 on the Nexus 5X to obtain this feature. That's the only negative and I'm being g honest.
Rating:

Reviewed by Chris W. from United Kingdom on 19th Dec 2015
With regard to memory capacity of the Nexus 5X (and the Nexus 5 recently updated to Marshmallow ) it should be remembered that Marshmallow now includes the option of OTG download into a one of the flash memory sticks with USB and micro USB terminals at each end of the stick.This will allow you to download pictures from the phones memory to free up space. The Nexus 5X would require a USB C to micro USB conversion connector for this of course of course.
Rating:

Reviewed by Anurag from Indian on 3rd Nov 2015
My Nexus 5X takes about 20 seconds from Wi-Fi off to on and connecting. That seems really long when comparing it to my old Nexus 5 which connects in about 10 seconds or less.  Do you think this is in response to the addition of Wi-Fi calling, the software, the build?
Rating: