Smartphones don't really come any cheaper than the Motorola Moto C, so it's no surprise to find that it has the look of a toy phone, with a simple plastic body and a removable back cover. It's not particularly slim or lightweight, but most people will find it to be inoffensive. It's the kind of phone that won't give you palpitations if you accidentally drop it.

The phone comes in a choice of Black, Gold or Metallic Cherry.

The screen is a good size for a budget phone, measuring 5 inches diagonally. Unfortunately it's a particularly low-end display, with a 480 x 854 pixel resolution giving a blocky pixel density of just 196 ppi. 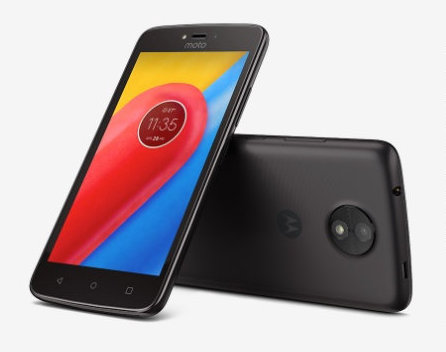 The phone runs the latest Android 7.0, which is good news. But the processor is underpowered, running at just 1.1GHz, which in modern terms translates as, "Hang on, I'll be with you in a minute." And with just 1GB of RAM available, you'll be stumbling through tasks like a snail.

It's not all bad. The 16GB of flash memory is more than many other budget phones have, and that definitely swings the balance in favour of the Moto C. You can add extra memory with a microSD card too, for storing photos, videos and music.

You get front and rear cameras on the Moto C. Both come with an LED flash and HDR mode, but they're both fixed focus, so you can forget about capturing sharp shots. With 5 megapixels on the rear and 2 megapixels in front, the cameras are suitable for grabbing quick snaps only. The rear camera can also capture video clips.

The battery in the Moto C is a relatively small 2350 mAh, but don't let that worry you. The low power demands of the device mean that it'll probably give you 1-2 days between charges.

Conclusion - not bad for a cheap phone

Let's face it. With a phone costing a little over £50, we can't expect much. The Moto C has all the basics covered, but it gives you little more than the minimum. It's best feature is probably the 16GB of memory, which is more than phones like the Samsung Galaxy J1 or LG K4 offer.

In fact, for the price, it's hard to find anything we'd rather own. The Samsung Galaxy J3 is a much better phone, but it costs quite a bit more.

How do I answer incoming call?

Asked by William from Scotland on 16th Jul 2018

Asked by Keith from United Kingdom on 29th Nov 2017

Reply by Sandy Laird from UK on 1st Feb 2018
Do you mean compatible?

Asked by c boothby from gb on 17th Nov 2017
never had a modern phone like this before so am struggling to do things.

Reply by John Shirtcliffe from UK on 8th Jul 2018
Have one myself - Download handbook from https://www.phonearena.com

Reviewed by Jim M from England on 15th Jun 2018
I have been using the phone for over a year.It does the basics very well,but I found the touch screen very sensitive and it is very easy to slip out of the app being accessed but I still consider it better than some of the phones of compatible value such as Alcatel etc.
Rating:

Reviewed by Pippa from Wales on 4th May 2018
This is the most useless phone I have ever had.
I am having to reboot it after approximately 10 mins of use.
Store staff just say it is the fault of my internet connection which according to the phone has full connection, but they can't explain why it happens away from my home.
Would advise anyone considering this phone Don't Bother.
Rating:

Reviewed by Hazel from England on 24th Feb 2018
Possibly the worst phone ever. Missing text messages , awful camera , clock that like the rest of the phone , doesn't work. A complete and utter waste of money. Dreadful, dreadful phone. Wish I could have left a zero star rating !
Rating:

Reviewed by Lesley from England on 30th Jan 2018
I find this phone so easy to use, basic but does what it says on the tin! I'm not one for always having a phone in my hand so if that's you it's maybe not trendy enough. I'm 50+ and like everything about it, except sometimes I find my photos are a little blurry which I am trying to sort at present. Hope this helps.
Rating:

Reviewed by Catherine from Uk on 10th Dec 2017
Very disappointed. Same problems with messages missing and the clock....may as well not bother as missed train because time froze. Waste of money.
Rating:

Reviewed by Adam from England on 29th Oct 2017
Awful phone. Real waste of cash. After my s6 died just after going SIM only I needed to get a phone. Whilst realising that at 80 quid I wasn't going to be getting a top spec phone I did expect it to do the basics. I have had calls I can't answer as the screen froze, countless times people have shown me the text they sent the me which had gone missing never to be seen again. I woke up late for work as the alarm don't go off with my phone still showing the time as 22.15 from the night before. And then today, whilst on charge, the battery went from 35% to dead in about 2 minutes and took me 1/2 hour to get enough charge in into turn it back on.

I cannot advise you enough not to buy this phone.
Rating: