The design of Motorola's Moto G series has always been plain, and nothing has changed in that respect with the 4th generation Moto G4. Neat, we'd call it, and practical too, with edge buttons that are easy to reach, and a water-repellent coating. That won't give it full water resistance, but will help to protect the phone from rain and occasional splashes.

It's grown in size compared with previous Moto G generations, and stands out as noticeably larger than most lower-range Android phones. But it's not bulky and it's not too heavy. While not particularly slim, its rounded edges make it feel comfortable in the hand. The textured back also gives it grip.

The reason for the increase in size is that the screen has been boosted to 5.5 inches, making it a really good size for multimedia, videos, etc. It's a sharp screen too, with a resolution of 1920 x 1080 pixels and a pixel density of 401ppi, which is much higher than most budget phones. 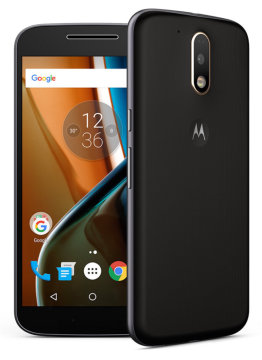 The Moto G4 is by no means a beast when it comes to power, but it can handle itself comfortably with an 8-core Snapdragon 617 processor running at a respectable 1.5GHz. And with a hefty 2GB of RAM it gives good mid-range performance, with no lag and fairly swift loading of apps. The 550 MHz Adreno 405 GPU is quick enough to handle most games.

Built-in flash memory is 16GB, and of course you can increase this at very little cost by adding a microSD memory card for bulk storage.

The phone runs an almost pure implementation of Android 6.0.1 Marshmallow.

The Moto G4 has standard camera performance for a mid-range phone. The rear camera is kitted out with a 13 megapixel sensor, autofocus, a dual-LED flash and automatic HDR mode to boost low-light image capture. The f/2.0 aperture lets in a lot of light, for improved low-light performance. There are plenty of features to assist in getting the best shot, including one called simply Best Shot, and a burst mode that lets you grab pictures in quick succession.

In terms of video, the camera can record at full HD 1080p resolution, with digital video stabilization included.

The front camera has a 5 megapixel resolution and is fixed focus, which is just fine for selfies. The wide angle lens lets you take group selfies too.

A dual-sim version of the phone is also available.

We're impressed by the phone's battery life, with a solidly-sized 3,000mAh battery on call for all-day use. Turbo-charging enables you to replenish up to 6 hours of battery life on a 15 minute charge.

The Moto G4 is a safe mid-range buy. With an almost pure implementation of Android, a fast-enough processor, sufficient memory and a decent camera, it ensures that you get a good all-round phone experience. The strong battery life and large screen are an added bonus.

Reviewed by Steve from UK on 7th Nov 2017
Good all rounder.
Rating:

Reviewed by Dennis from United Kingdom on 12th Jan 2017
I bought this phone as a replacement for a old Samsung. Never had a phablet before it didn't take me long to get used to the size of it. Its missing a few features of a high end phone like NFC etc but I never used the feature on previous phone so don't miss it. I would recommend this mid spec phone for anyone on a budget, you won't be disappointed.
Rating:

Reviewed by Charley from UK on 25th Oct 2016
I wanted a large screen to use my second sim which is for music, films and sport.
Must have long battery, good sound but light enough to fit in the pocket.
It has all of the above and to my surprise, after trying a few headphones, the sound quality just blows your ears.
Spotify on high quality better than my iphone 6.
FANTASTIC BUY IT.
Rating: