Samsung's affordable Galaxy J5 smartphone has been a huge hit, bringing an impessive HD AMOLED screen, decent camera and outstanding battery life to the generally unexciting mid-range sector of the market. For 2016, Samsung has updated the J5 with improved build quality and some uprated features.

The styling of the new Galaxy J5 SM-J5108 isn't very different from the original J5 with its rectangular shape and rounded corners. The power button is on the right edge, with volume rockers on the left. below the screen is the usual Samsung home button, with capacitive Android buttons to the left and right.

The 2016 model of the J5 has a slightly larger screen - 5.2 inches instead of 5 inches. It also has a bigger battery, and these two factors have made the 2016 J5 slightly larger. But Samsung has managed to keep the phone very thin, at just 8.1mm. The camera bump on the rear has been reduced in size, making the phone flatter. The build quality has been upgraded to meet the demands of users for a phone that looks and feels premium, even at the mid-range. So the 2016 model is constructed from an aluminium frame around a plastic body. It lends the phone a premium feel, but also increased weight, making the new J5 one of the heaviest for its size. Handling the J5, it feels like a very substantial high-quality device.

The 5.2 inch screen is a very good size, and in fact the screen is one of the best you'll find on any mid-range phone. It's HD, with a 267ppi pixel density, and uses Samsung's superb AMOLED display technology. This gives it excellent contrast, colour saturation and crispness. It's bright too.

Overall, the increased size and weight of the phone aren't a problem. You can still handle the phone with one hand, and the improved feel of quality is very welcome.

Under the bonnet, a few upgrades have been introduced for the 2016 model.

The phone runs Android Marshmallow 6.0.1 with the usual Samsung customizations.

Although the processor is unchanged from the previous model - it's a Snapdragon 410 with four 1.2GHz Cortex A53 cores - the RAM has been increased to 2GB, which helps with multitasking, and makes the phone run smoothly.

Most welcome is the doubling of internal storage to 16GB, giving plenty of room for apps, videos and music. You can add a microSD memory card for up to 256GB of additional storage.

There's no change to the basic camera spec, with a 13 megapixel rear camera. It's a competent performer for a mid-range phone, equipped with autofocus, LED flash, digital zoom, touch focus and face detection. It can also record 1080p HD video.

The front camera has a 5 megapixel sensor and an LED flash. A new feature has been introduced to make taking selfies simpler - hold up your palm to the screen, and it’ll automatically trigger a countdown timer. 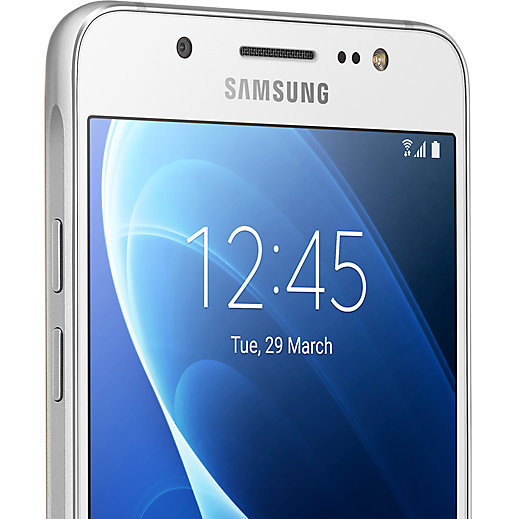 The J5 is a 4G phone with a full suite of connectivity options - GPS, Wi-Fi, NFC, Bluetooth, USB and a headphone jack.

One of the most impressive features of the original Galaxy J5 was its long battery life. Well, the Samsung J5 2016 has an even bigger battery with 20% greater capacity. This makes it one of the most durable smartphones around.

Samsung has built the Galaxy J5 2016 on a very solid platform. The original J5 was a very sound all-round performer, priced competitively, and the new J5 brings improved build quality and some selective performance tweaks.

We like the design of the phone very much, and its size is practical. The combination of slim body, metal frame and above-average weight gives it a really premium feel, and it's great to handle.

We could pick out some top features such as the AMOLED display, strong battery life and 16GB of storage, but the real strength of the J5 is that it combines all the elements needed in a modern smartphone with no real weaknesses. if we could change one thing it would be to make the processor a little faster.

Most of the 2016 Samsung J5's I can find for sale in the UK are the SM-510F model that was released in India not the FN which is the European model. Will this cause me any problems using in the UK?

Asked by Kevin from UK on 30th Aug 2017
I want to purchase a sim free Samsung J5 for use in the UK but am concerned about getting a model that was released in a different country.

When I get drop box options for certain things the box is just blank. It could be for dates or product type variations. Have I missed something in settings?

How do you set up mms as tried several ways I've read how to do this without success?

Asked by Shirley from United Kingdom on 23rd Apr 2017

Reviewed by John from Ireland on 14th Jan 2018
J5 2016 is trash. I bought one new about 8 months ago, never dropped it or anything. It worked fine for about the first 7 months but lately it just seems to have become a problem for no reason at all. I've always been good with electronics, computers, phones, etc so I know when I have a problem with a device, it's the device, not me. I don't know if it was the Android 7 update or just a faulty phone but I can't seem to do anything right on this piece of garbage phone. The screen turns on randomly even when I'm not touching it. Google chrome is constantly refreshing for no reason. Spotify and other music apps stop playing music for no reason. Everything is glitchy and just doesn't work right. Tried factory restoring and that didn't help. Still tons of problems. Seems to have a problem with literally everything you tell it to do.

Reviewed by Stella from United Kingdom on 23rd Aug 2017
My Samsung Galaxy S3 died and I couldn't afford an S8 so had to settle for this. Disappointing features....ni screen mirroring facility ...bluetooth does not work. Apart from that it is a fast,efficient, attractive little phone with terrific battery life and as it only cost me €144 is terrific value for money. I still want my S8 but this will do me well until I get one.
Rating:

Reviewed by GSMreview from Romania on 29th May 2017
I've been using this phone since June 2016, it has a good camera, the battery is ok for me. Is not the best but is good!
Rating:

Reviewed by Helen from England on 18th Apr 2017
Rubbish...keeps turning on n off during conversation...tried resetting new sim n still doing same. Wouldnt have another.
Rating:

Reviewed by Dee from England on 7th Mar 2017
Just bought one of these. Changing from a Windows smartphone, so all new to me. Is there a diary/calendar on this phone? Not talking about the S calendar because that only allows you to put stuff in one at a time. My Windows phone asks whether I want to store the date, weekly, monthly, annually etc and then asks what reminder I need - and then saves it for eternity. This Galaxy doesn't seem to have this feature ? I can't believe that you have to type every single thing in for every single date, time, year etc. Not impressed at the moment.
Rating:

Reply by Dcr from Uk on 19th Mar 2017
Your problem is not with the phone but your app my advice is to try a different calendar app.

Reviewed by Sam from England on 25th Jan 2017
Generally overall not a bad phone the simplicity of use could be refined to a reasonable standard. rather difficult for the average person to end calls. Nothing special about the battery life that I have noticed. difficult to clear areas where one has visited.
Rating:

Reviewed by Karma Chophel from Bhutan on 2nd Dec 2016
I am using this product and love its performance and speed.
Rating: