The Galaxy J5 has been a roaring success, offering a premium-styled phone with good specs to the budget shopper. For 2017, Samsung has refined the design of the J5 further, bringing in a metal casing, slimming the phone by a fraction, and aligning the camera lens flush with the metal body. This brings the look of the phone closer to the higher-end Galaxy A series.

The phone is an almost perfect size, balancing the desire for a big screen with a compact and slim body. With a thickness just under 8mm and a weight of 160g, it has a solid yet slimline feel that adds to the impression of quality. With trademark Samsung looks, users will feel immediately at home with this phone.

The home button below the screen incorporates a fingerprint sensor, which is a nice addition in a lower-end phone, and this works smoothly and reliably. You can unlock the phone simply by touching or pressing the home button. The usual capacitive Android buttons can be found to the left and right of the physical home button.

The 5.2 inch screen is the same as in the 2016 version of the J5. It's a good size at 5.2 inches and has a HD resolution with 1280 x 720 and a moderate pixel density of 267ppi pixel density. Not bad for a mid-range phone. The display uses Samsung's superb AMOLED display technology, giving it excellent contrast, colour saturation and crispness. It's bright too. 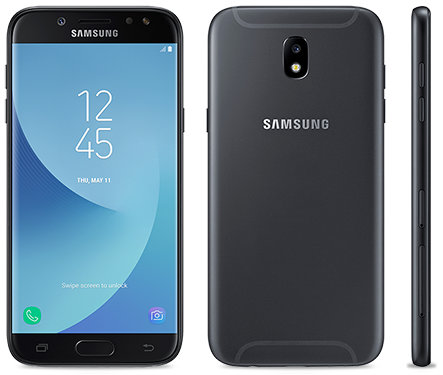 Samsung has been working under the bonnet of the J5 too, upgrading the processor from the slightly sluggish 4-core processor of the 2016 model to a new 8-core Exynox 7870 processor. This runs at a faster 1.6GHz clock speed and gives a significant performance boost. With 2GB of RAM and a Mali-T830MP2 graphics processor, it's an identical platform to the Galaxy A3 2017, and gives good performance.

The OS has been updated to Android 7 Nougat.

The 16GB of storage is in line with our expectations for a phone at the lower end of the market, and can be upgraded with a microSD memory card for up to 256GB of additional storage.

The rear camera of the J5 has remained unchanged since the phone first launched in 2015. It's a 13 megapixel camera with autofocus, LED flash, digital zoom, touch focus and face detection. It can record video at 1080p HD resolution. The camera performs as well as most others in the mid-market.

The front camera has been upgraded for 2017 to 13 megapixels.

The J5 is a 4G phone with a full suite of connectivity options - Wi-Fi, NFC, Bluetooth, micro-USB and a 3.5mm headphone jack. GPS, Glonass and Beidou positioning complete the package.

The battery life of the J5 series has always been strong and nothing has changed in this regard. The big 3000mAh battery gives very solid performance, making it a good choice for heavy users.

The Samsung Galaxy J5 has always appealed to those looking for good all-round performance for a modest spend. Samsung has moved the J5 slightly upmarket in 2017, giving it a metal casing and a faster processor - both very welcome moves. The phone doesn't really put a foot wrong. It's not a flasghip phone by any means, but it can do everything you need from a modern smartphone.

However the price has sneaked up a little, pushing it over the £200 level for the first time. We'd feel much more comfortable paying £200 for the J5, and if the price falls to that level (which it should), then we'll upgrade our rating to 5 stars.

There's plenty of choice at the middle of the market in 2017, and before parting with your money you should also seriously consider the Huawei P8 Lite 2017 and Sony Xperia XA1. At its current pricing, the J5 isn't very much cheaper than the superior Samsung Galaxy A5 2017 or Huawei P9 Lite.