For the past two years, Samsung buyers have been torn between their hearts and their heads: the Edge versions of their phones have captured their hearts, while the normal S6 and S7 models have offered better value. In 2017, Samsung has removed that problem by bringing the "infinity glass" design to the standard S8.

That's one way of looking at the change. The more cynical way is to say that Samsung has removed the lower-priced option, and made the more expensive Edge version the only model available, because the price of the S8 is far from cheap. If you want it free on upgrade, you'll be signing up to a two-year contract at around £45 - £50 per month, making it even more pricey than the iPhone 7. Eek!

Superslim at 8mm thick, with a gorgeous curved edge-to-edge infinity glass screen, it makes the iPhone 7 look like a toy. The metal-and-glass design is simply stunning, and Samsung has seemingly delivered the impossible - an absolutely enormous 5.8 inch screen in a body that's actually narrower than last year's Galaxy S6. It's done this by removing the physical home button and making it virtual and part of the screen, together with back and recent apps buttons. The fingerprint sensor has necessarily been moved to the rear, but if you don't like that change, there's always the iris and facial recognition instead.

The always-on screen is nothing short of spectacular. Samsung's Super AMOLED technology is the best display tech around, delivering punchy saturated colours with the deepest blacks, and the S8 has an incredibly high Quad-HD resolution with a 570ppi pixel density. It's HDR compatible too, so you'll be able to watch HDR video on your phone.

The dual edge display gives you quick and convenient access to apps, contacts and other shortcuts. And of course it just looks amazing.

The phone is water resistant, and comes in a choice of Black, Grey or Silver. 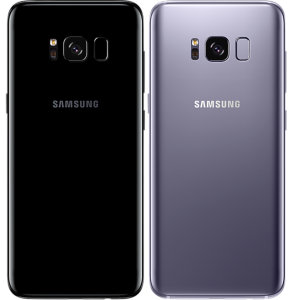 The S8 launches with Android 7.1 Nougat, plus Samsung's TouchWiz user interface modifications. It also features the new Bixby virtual assistant, which replaces S Voice. This is a voice-activated personal assistant, similar to Siri. Unfortunately, Bixby isn't included in the phone at launch in the UK.

Samsung is sticking with its own Exynos 8-core processor for the European version of the Galaxy S8. The new Exynos 8895 is clocked at a slightly slower speed than last year's Exynos 8890, but uses new 10nm technology for improved performance and power efficiency. Samsung claims 10% faster performance, and a 20% boost in graphics performance, and certainly the phone responds almost instantly.

The phone comes with a massive 4GB of RAM too.

The flash memory of the S8 has been doubled up to 64GB, and you can also add a microSD card to give an additional 256GB of storage. That's a huge advantage over the iPhone 7, which comes with a non-expandable 32GB of memory in its basic version. It also puts the S8 at the leading edge of Android phones, matched only by the Huawei P10.

Samsung has been battling for the title of best camera phone for many years, and arguably achieved it with last year's Galaxy S7. The S8's camera hasn't changed much, retaining its 12 megapixel sensor, huge f/1.7 aperture, auto-HDR, optical image stabilisation and phase-detection autofocus. This array of tech delivers sharp, bright, well-balanced photos in all but the most challenging conditions.

The front camera has been uprated to 8 megapixels, and also features the same large aperture and auto-HDR as the rear camera, capturing well-lit selfies even in dingy bars.

Both front and back cameras can record 4K video.

There are a few changes when it comes to connectivity. As we mentioned, the fingerprint scanner has moved to the rear of the phone. The USB connector has been upgraded to the new Type-C. And positioning is now possible using the GPS, GLONASS, Beidou and Galileo satellite networks.

No change here. 3,000mAh is the same as last year's model, and battery performance is likely to be very similar. Most users should easily get a day's use with power to spare, and the S8 supports fast charging, and wireless charging as well. 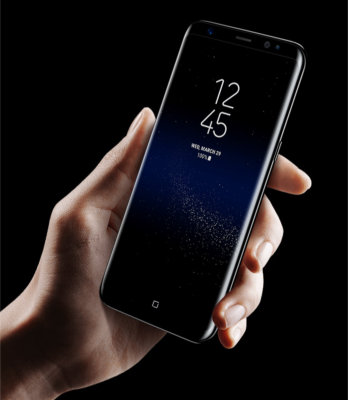 Conclusion - raising the bar (and the price)

The Galaxy S8 may seem to offer little more than last year's Galaxy S7 Edge, and in many ways, that's true. What it does is refine the product even further. In an extraordinary feat of design and engineering, the S8 squeezes the biggest-ever screen into a mainstream phone, but keeps the device dimensions to a manageable size. The phone is the sleekest ever, and of course if you're upgrading from a Galaxy S7 or S6, or some lesser phone, that infinity screen will simply blow you away.

Add in the doubling of memory, the USB Type-C connector, and Android 7, and there are several reasons to justify the cost of upgrading to the Galaxy S8. It's in every way a contender for "best phone ever", and if money's no object, we wouldn't hesitate to recommend it.

Otherwise, you may want to consider last year's Galaxy S7 Edge, or wait for the price of the S8 to fall a little. If you want even more, try the Galaxy S8 Plus.

Asked by George from England on 5th Aug 2017

What about the s8 plus?

Reviewed by Charles from Uk on 2nd Oct 2018
Brilliant smartphone, nothing to fault.

Note to Editor; Are you going to review the S9 then? There's no review for the A8 either. Maybe you've gone bust ;) x
Rating:

Reviewed by Lewis from UK on 29th Mar 2018
I’m on board with Paul’s review from the 7th November 2017. Having parted ways with my iPhone 6s which was 2 years old I decided to change make and ecosystem. The S8 is a well made device but i just couldn’t get to grips with the curved edges to the screen and curved corners on the display.

Once updated to Oreo the device felt like it stuttered more than it did before. Overall experience didn’t feel as polished as iOS Sidon the 6S. Another annoying thing, even with the accidental touches feature enabled I would time to time pull my phone from my pocket to find an app had been launched upon unlocking the phone. Odd as I had t opened it before it was locked. The app varied. Battery life was hit and miss. Some days I could go from 07:00 to 23:00 and still have 20-30%left with a good amount of moderate use. Other days with less use would see me on 15% by 21:00. Very odd.

More RAM and a fast multi core CPU doesn’t always make a brilliant device. I feel my 6S out performed the S8 in every way, hence my reason to go back to an 6S instead of an iPhobe 7 or an 8.
Rating:

Reviewed by Tris from UK on 17th Sep 2017
Bought this to replace my aging iPhone 7 plus that has served me faithfully. What can I say. Everything you could want in a phone except the kitchen sink. So much so in my case it wasn't used. Face I'd, edge content, wireless charging and not to mention all the software extras. By far it's the best phone on the market right now. Certainly far better value then the crazy iPhone x.kinda got to realising all I really wanted was a well built simple mobile phone. One that had just enough..... And what it did have was very well made indeed. So I sent it back and bought a Nokia 8. Couldn't be more happier with it. But I won't knock the S8 in anyway. I just simply found that I was paying a lot more for the S8 then the Nokia 8 for lots of features I knew I would never use. Simply if you want to be cutting edge then the S8 is the only real choice. You would be insane to get the iPhone X.
Rating:

Reviewed by Chris Mac from Wales.UK on 17th Aug 2017
Write a review of the s8+ but the unit has disappeared from the web site...????? This is an addendum to the original.... The whole issue of the rear facing fingerprint sensor is redundant and not relevant......!!!! I have small hands and its a breeze and ultra quick.....Like all new things you have to adapt slightly and believe me ignore all the negativity focused on this 1 issue.....Its not an issue...... The phone is stunning.... Ive had 6 samsung phones and didn't want another especially the s8+.... Oh how I was wrong.... Stunning handset by smasung.... Stunning...Ps...Where has the s8+ segment / review gone...????
Rating:

Reply by S21 from UK on 17th Aug 2017
Hi Chris, thanks for your review. The S8+ is where it's always been - here - and you can navigate to it from the links on the left of the screen (on a mobile device click the search button at the top of the page.)