The Galaxy Tab S3 isn't quite as slim or light in weight as its predecessor, the Tab S2, but it's still ultraslim, with a thickness of just 6mm. Build quality is impressive, with a smooth glass back and a screen that almost fills the front panel, leaving just enough of a border to comfortably grip the device. The home button below the screen incorporates a fingerprint sensor.

The screen is the same very impressive display that we saw on the Tab S2, using Samsung's Super AMOLED technology to deliver vivid and colourful images that are a feast for the senses. The ultra-high 2048 x 1536 pixel resolution makes everything pin sharp. The screen supports the HDR standard too, although no content is yet available for the device in this format.

In our review of the Tab S2 we moaned about the tinny sound from the tiny speakers. The Tab S3 deals with this problem decisively by upgrading to a four-speaker audio system with much more punch.

The Tab S3 also comes with an optional keyboard, turning it into a super compact laptop replacement for mobile use. It's a good keyboard for its size, and comfortable to use. The keyboard is optional, but an S-Pen is included with the tablet. 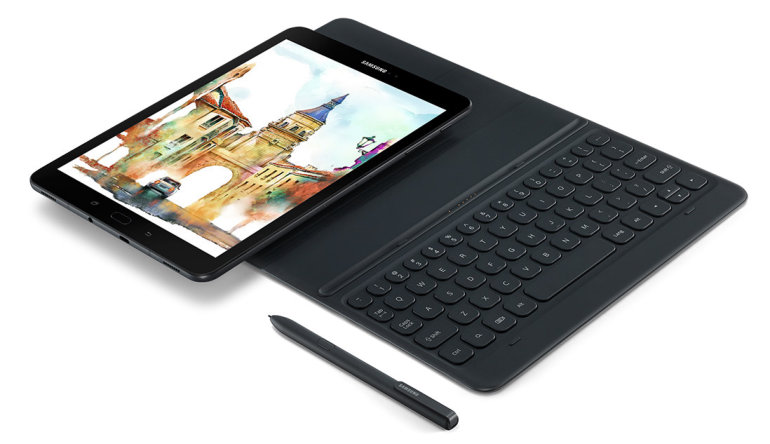 Android continues to grow in maturity, and the Tab S3 comes with version 7.

The Tab S3 comes with a quad-core processor instead of the 8 cores of the S2, but don't let that worry you. The clock speed of the CPUs has been uprated to 2.15GHz, making the S3 some 18% faster on paper. In practice the increase in speed is noticeable, with everything responding instantly, and even heavy apps loading in almost no time. The massive 4GB of RAM helps to avoid any lag when the processor is pushed hard. The GPU has also been given a big upgrade - Samsung claims that it's three times faster at rendering 3D graphics.

The tablet comes with a decent 32GB of flash memory, and you can add a microSD card for more storage. To be honest, for the money this tablet costs, we'd have appreciated 64GB of storage, but the microSD card slot does go a long way to fixing this.

The rear camera has been given a substantial boost too, with a 13 megapixel sensor, and the ability to record 4K video. The front camera uses a 5 megapixel sensor and can be used for selfies or as a webcam.

We're reviewing the Wi-Fi version of the Tab S3, but a 4G version is also available for full mobile connectivity. Both models include fast Wi-Fi, Bluetooth 4.2, USB, GPS positioning and a headphone jack.

The Tab S3 is thicker than the S2, and perhaps one reason for this is the slightly larger battery. With a capacity of 6,000mAh, this can power the device for up to 8 hours of continuous use. It's not as powerful as the batteries Apple puts in its equivalent iPad range though, and heavy users might find themselves searching for power sockets more often than they'd like.

If we include a section on pricing in our review, it's because we've got a problem. Our problem with the Tab S3 is that with a price of £600, it costs some 50% more than the Tab S2, even though the differences are relatively modest. Hey, it even costs more than the iPad Pro, and that's seriously wrong.

It's not one that will be on S21's shopping list. Although it's the nicest tablet Samsung has ever made, with a fast processor, premium build and that optional keyboard, it's super expensive. It doesn't do much more than last year's model, and so the price hike seems quite unjustified. If you want to spend this kind of money, you should first read our iPad Pro review. 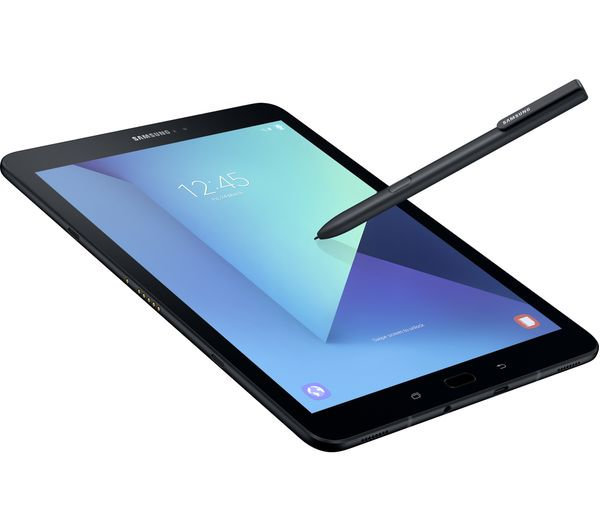