We're starting our reviews of Samsung's 2014 line-up of LED TVs right in the middle of the range with the Series 6. This is where you'll find the best value and it's where most people will be putting their money. The mid-range H6400 looks like a good bet, and we wouldn't be surprised if the 40-inch version ends up as the top-selling telly of the year.

The UE40H6400 is the replacement of last year's F6400, and it's similar in most respects, but with some useful enhancements that make it an even better choice.

The design features an ultra-narrow 10mm black bezel that makes the picture appear to float in mid-air. It's a very modern and stylish look, and will fit nicely into any front room. 40 inches is a very popular size, ideal for modern living, whether you're a family or single. The TV is reasonably slim and features a smart metallic quad base that allows you to swivel the TV left and right. There's a good set of connections round the back (see below for details). 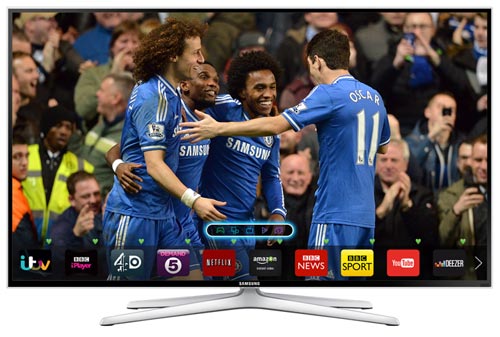 The TV comes with a conventional remote control, but also has a pebble-like Smart Control included. The Smart Control uses a touchpad and Wii-style motion control to access the Smart TV functions on screen. You can also use it to give voice commands to the TV, a feature previously available only high-end TVs. Another feature new to the Series 6 range is a quadcore processor, ensuring that the TV responds fluidly to commands and there are no frustrating waits.

Energy consumption is extremely low, at just 50W in normal use, giving it an A+ rating.

The H6400 models all have Full HD screens, with a resolution of 1920 x 1080 pixels. We expect the 40 inch version to be the top seller, and it's a good option for a medium-sized family TV. The screen is of PSA type, previously used in Samsung's high-end screens. PSA screens are capable of producing high contrast ratios and wide viewing angles, and that's true of this Series 6 model.

Although the H6400 lacks any kind of local dimming, it's nevertheless capable of delivering excellent picture quality, with bright, vivid colours and nice dark blacks. It's perfect for use in daytime, but also performs well in darkened rooms. The Clear Motion Rate (CMR) is 400Hz, which is a step up from last year's F6400, and there's very little in the way of motion blur, especially in this 40-inch version. Samsung's Motion Plus interpolation function tends to produce a "soap opera effect" in default settings, but set it to Custom mode and make some adjustments to the Blur Reduction and Judder Reduction and you'll soon find a setting more to your taste.

Gamers will find this to a responsive screen without much lag, provided that Game mode is selected. There's also a Football Mode, although this seems to be little more than a sales gimmick.

Overall, this is an impressively high-end display from a very reasonably-priced screen, and we have no problems recommending this as an all-round family TV.

The UEH6400 uses uses active shutter glasses, and the 400Hz CMR is just about fast enough to stop ghosting and flickering effects from ruining 3D viewing. 40 inches is probably the smallest size screen at which it makes sense to watch in 3D, so we can't recommend this TV if you plan to watch 3D regularly.

Two pairs of active shutter glasses are included in the sales package.

The H6400 uses full range downfiring speakers, and max power output is 10W x 2, which is typical for a mid-range TV. There are no dedicated subwoofers here, so the sound tends to be on the weak side. The 3D surround effect can add a little depth, but overall the audio quality is average for a slimline television. A dedicated soundbar or speaker system would be a worthwhile addition if you are serious about enjoying your movies.

Samsung's Smart TV system hasn't changed much since last year, but that's not a problem, as it was already the best system on the market. The interface is very user-friendly, especially when using the Smart Control, and it runs smoothly thanks to the quadcore processor. 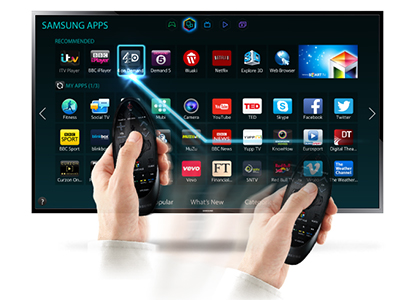 Samsung seems to have covered all bases with their Smart TV apps, including catch-up TV via the BBC iPlayer, BBC Sport, ITV Player, the 4oD service from Channel 4, and Demand 5 from Channel 5. You'll also find staples like Netflix, Amazon Instant Video, Skype, Twitter, Facebook and others. The new Games Panel offers casual gaming access to categories including racing, sports, action and family games.

The TV guide recommends programmes based on your viewing history.

Social media are fully integrated into the Smart TV system, so you can keep up with your facebook and twitter feeds and watch your friends' videos.

The connectivity options available in the H6400 are also excellent, with a Freeview HD tuner plus built-in Wi-Fi Direct, a generous 4 HDMI ports (one of which supports ARC for connecting to an audio system), 3 USBs and ethernet. A range of other connections are also included, making it possible to connect to most devices around the home, including wireless streaming of content from compatible tablets and smartphones. You can even stream broadcast TV content to your smartphone, although this seems like the wrong way around - better to stream video and photos from your smartphone to the big screen we think.

The UE40H6400 is a step up from last year's F6400 model and we welcome the improvements. It's an all-round impressive mid-range TV with no real problems to speak of. You could say that it's everything we could ask for in a mid-range television.

40 inches is a decent size for most families, although if you have a particularly large room we'd recommend considering the 48 inch model instead.

The TV is smart-looking, modern and stylish, has very good 2D picture quality and acceptable 3D. Audio quality is fair and the Smart TV and connectivity are key strengths.

At launch this model was priced at £800, but already it's fallen to £500 or less, making it absolutely incredible value. We reckon it's probably the best 40 inch smart TV of 2014.

I'm looking for a 40 inch tv that has good connectivity as I have a lot of legacy consoles. What would you recommend?

Asked by Robyn from England on 16th Jul 2016
I'm not worried about 3D ou ultra HD but would like to be able to easily access things like netflix and i-player.

I`ve been looking for a 40" TV for an elderly person who will be watching a lot of freeview TV.

Asked by Richard from UK on 12th Apr 2016
As she can`t see vevry well she won`t be using any of the smart features. I`m looking for a TV that does a good job of upscaling standard as well as giving very good HD image quality. Are there any advantages to having a 4K at present and will it do a better job on standard definition and HD channels? The three brands I like are Sony Panasonic and Samsung. Would she be better off with the Panasonic TX-40CX680B rather than say a Samsung UE40H6400? Thank you.

Reply by S21 from UK on 12th Apr 2016
Richard, there is no advantage to having a 4k TV for watching Freeview. Brand choice is really a matter of personal preference.

Would it be possible to replace the unattractive metallic quad base with the new T-shape design or a base from an older model?

Reviewed by kingston from india on 27th Apr 2018
hi i purchase samsung smart tv in 2014 now only i check BT is not working, i check in online YOUTUBE there option in inbuilt setup Enable and Disable for BT option. please put update for samsung 6400 LED smart tv modul for BT as soon as possible

Reviewed by Chris from England on 29th Oct 2015
Poor value for money if you've got a hearing problem as the TV is not compatible with a Bluetooth Streamer since Samsung tie it to their products.
Their claim that it's got 'accessibility' is based on an outdated impression that all hearing impaired people are stuck in a low tech world!
Many people would benefit from a connection to a BT streamer which gives the individual better sund without changing the basic setting for other TV viewers.
Rating:

Reviewed by John Poole from England on 28th Aug 2015
We have had this tv for over a year now and it is the best we have ever had (nearly going on 60 years of tvs!!). We enjoy all the features, picture quality is great but a sound bar for us oldies is an essential ( got a cheap one from Sainsburys which is more than adequate for our failing hearing.). Easy connection with BT Youview and Now tv boxes - great to have these additional features at a reasonable cost on a great picture tv.
Rating:

Reviewed by Alan from UK on 21st Sep 2014
UE40H6400 and UE40H6200 have near-identical specs.Same panel, both a 200Hz CMR(Clear motion Rate) and 400Hz CMR have a real panel refresh rate of 120Hz, the bigger CMR of 400Hz is just a marketing,overall picture quality is the same,except some features include,and if you are concerned only about the picture you can choose model with less price UE40H6200
Rating:

Reviewed by Mat from UK on 7th Sep 2014
Having purchase a 6400 from RicherSounds a week ago, the only disappointing thing we have found is lip sync issues using the buiiltin freeview tuner.

No such issues through the Virgin Media STB, our primary source, but something as fundamental as video/audio sync being "faulty" on a TV seems a massive oversight. No doubt, there are some extremely technical things going on here, but it would be a bit like a car where the steering wheel has delay before the wheel turns left/right - something one would not expect.

Other than the lip sync - excellent TV (especially at £499 including 5 years warranty from RicherSounds).
Rating:

Reviewed by Mike4369 from UK on 19th Jun 2014
Despite all the tech features I am disappointed that I cannot connect my iPhone4 or bluetooth soundbar. There are no instructions in the poor quality manual that came with it but the online manual suggests that some smart phones are not compatible. Come on Samsung surely there are ways to connect our devices to your TVs without having to buy Samsung only products.
Rating:

Reply by Si from Uk on 29th Jun 2014
Hi - I have this TV and I can connect my iPhone 4S on ios6 using the SmartView 2.0 app.
Overall am very impressed with the TV in terms of features, usability and picture quality, though I have noticed occasional lip sync problems on some channels. Sometimes it's minor sometimes bad and sometimes resolves itself but still irritating to have such a fundamental problem - and this has been an issue mentioned by owners of Samsung TVs for sometime. I was hoping the 2014 models would have fixed it.
I find using my Humax Freeview HD connected by HDMI has no lip sync problem so it's an issue I can workaround, but the TV shouldn't have issues with its own internal tuner.

Reply by Johnny from N.ireland on 31st Dec 2014
Great TV but a huge downer is not being able to wirelessly connect headphones via the bluetooth. As there is bluetooth transmitter perhaps samsung will come to their senses and add this feature down the line.