The 40JU6400 is a very modern-looking TV. It's flat, which we prefer over Samsung's curved designs, and it has a narrow black bezel that makes the picture appear to float in mid-air. The build is lightweight plastic, although it looks smart.

It's a very modern and stylish look, and will fit nicely into any front room. 40 inches is a very popular size, ideal for modern living, whether you're a family or single.

The screen is quite thick compared with many models, as you can see from the side profile image, and that's because it uses Direct LED backlighting (more on this under Picture Quality below.)

The stand has been updated to a new T-shape plate, which we do prefer to the old quadstand design from last year, although it means that the TV cannot swivel on its stand.

The TV comes with a fast quad-core processor, so everything runs very smoothly, and it's easy to use. There's a built-in 7 day programme guide, and Smart TV too. It ships with a single standard remote control.

The TV is UHD, and this does mean that energy consumption is higher than last year's model, using up to 147W of power. Still, it's A-rated for efficiency.

You've probably already noticed from the photo that the JU6400 is a UHD (4K) TV. Is there any point in having UHD on a 40 inch screen, you may ask, and the answer is probably no. However, UHD is what Samsung is giving us, so we may as well take what's on offer. There's presently very little UHD content available (just a little on Netflix, Amazon and YouTube), but more will come, and with the JU6400 you'll be ready for it. In the meantime, the TV upscales normal HD content very well, but you'll be pressed to notice any difference between this and a normal HD television. 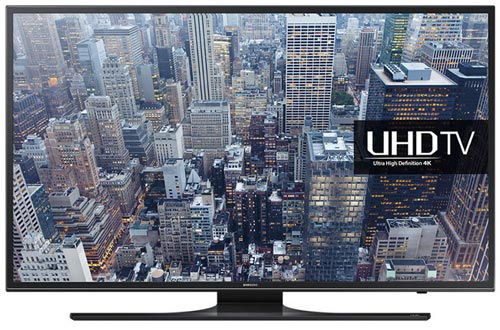 The JU6400 is a typical Samsung screen, with very deep blacks, reasonably low input lag for gamers, and moderate viewing angles. It makes use of Direct LED backlighting, which is the reason the chassis is so thick, but the benefit of this is that the backlighting is nicely uniform. Colour accuracy in Movie mode is very good.

The backlighting uses a simple dimming technique, which improves contrast, but doesn't offer the high dynamic range of more expensive models with local dimming systems. Although contrast levels are good, detail is often lost in darker areas of the scene.

Viewing angles aren't the widest, with the contrast dipping noticeably at around a 45 degree angle, so this could be an issue if your home setup doesn't allow you to watch the TV front-on.

Motion interpolation isn't particularly a problem, even though this isn't the fastest screen available, having a Clear Motion Rate of just 200Hz.

There's no 3D viewing, but since this isn't something that's really caught on, it probably won't be missed. Just be aware of it when you buy.

Samsung now assigns each TV a Picture Quality Index (PQI), which is a new way to mislead, sorry, inform consumers. The JU6400 has a PQI of 900, which puts it roughly in the middle of the range. Take it with a pinch of salt.

For typical family viewing, this TV performs well. Movie buffs may notice the lack of shadow detail when watching in a darkened room, and there are certainly issues with viewing angles. However, for a mid-range mainstream model, the JU6400 performs very well. UHD at this screen size is something of an irrelevance however, unless you watch your TV at a distance of about 5 feet or less.

The UE40J6400 has average audio performance for a mid-range TV. The twin speakers are rated at 10W, which is typical, and with no dedicated subwoofers, bass is lacking, and depth can be weak. For normal TV programmes, audio quality is quite acceptable however, with dialogue produced reasonably well, but sound effects in movies are poorly reproduced. We'd recommend the addition of a soundbar to get the best out of this TV.

Samsung's Smart TV system has been overhauled for 2015, and is now based on the open-source Tizen operating system. The new system is nicely integrated into the TV's operation, and lets you select apps and input sources with ease.

You'll find streaming services Netflix and Amazon, as well as catch-up TV from the BBC iPlayer, ITV Player, All 4 and Demand 5. Other apps include YouTube, a web browser, games, Skype, Facebook and Twitter.

The JU6400 comes with a built-in Freeview tuner, and also Wi-Fi and an ethernet connection. There are 4 HDMI ports (including ARC and MHL compatibility), 3 USBs, an optical audio output, plus composite and component inputs, and a headphone jack, but no SCART.

Other options include DLNA and screen mirroring for compatible smartphones and tablets.

The TV comes with a built-in Freeview HD tuner. In the past, users have sometimes complained of lip-sync issues with the tuners in Samsung TVs and this may continue to be an issue for some users.

The UE40JU6400 is a good all-round mid-range TV, and this might well turn out to be the biggest-selling TV of 2015. 40 inches is a decent size for most families, although if you have a particularly large room we'd recommend considering the 48 inch model instead.

The TV is smart-looking, modern and stylish, has very good 2D picture quality but no 3D. Audio quality is good for most purposes, and the Smart TV and connectivity are key strengths. The narrow viewing angles are our only real concern with this model.

We don't think that UHD offers much at the 40 inch screen size, and in fact if you watch standard definition TV channels, you might even prefer a lower resolution (1080p HD) screen. Still, UHD is coming, and with the JU6400 you'll be ready for it.

At launch this model was selling for around £700, which was hugely over-priced. Now that it's fallen to around £550, it offers much better value. We hope it might even fall to £500 in time for Christmas 2015.

Can I get internet on the tv?

I need a scart for my VCR so what do I do?

Asked by Peter Kennedy from UK on 2nd Nov 2016
The good old Panasonic VCR does not have hdmi input.

What operating system does ju6400 run on?

Reviewed by Guy parris from Scotland on 7th Apr 2016
I just bought this tv since I had issues with the 43 lg690v. The screen is 40 inches but you can really see the detail it looks stunning and wipes the floor with hd. I sit about 7ft away and can see all the detail. I owned the 43LG690v and this tv is miles better for picture quality the upscaling is far superior than the lg. The lg suffered from contrast and also Upacaling issues. According to reviews most of the lg series suffer from upscaling issues. So happy with this t.v it's worth every penny.
Rating:

Reviewed by Bob C from England on 13th Dec 2015
Just replaced a five year old Sony Bravia with this model. Picture quality is excellent and the set-up is easy. Great value.
Rating:

Reviewed by Rob flook from Uk on 29th Oct 2015
Awesome got this TV for under £500 and wow, I had led 40 inch Samsung hd and their is a difference trust me especially on Xbox one!! Awesome tv 😊😊😊😊😊
Rating:

Reviewed by Bob from England on 28th Sep 2015
Have just bought the TV and very impressed. Did a fair bit of homework before buying and considered other models before going for this one - thought this offered best value - still have that opinion.
Rating:

Reviewed by Hagen from UK on 26th Jun 2015
Empty promises and pathetic design.

According to the manufacturer this TV is a smart TV with BBC IPlayer and other great features. BBC IPLayer and ITV player and All 4 and Demand 5 actually don't work and Samsung just states "coming soon" - no idea when and no progress announcements. The remote is a nightmare to use for text input. The cheapest smartphone has a better interface. It takes several minutes to input one word. Youtube can't be activated. There are just activation codes coming up but they actually don't do anything.

How come a 40 inch TV can't deliver what small smartphones can? Will choose different TV next time.
Rating: