If you visit your local TV showroom, and say that you're looking for a dirt-cheap big screen TV, the salesperson will probably throw words like 4K, UHD, and HDR at you. Ignore that. Tell the salesperson that your budget is £500 tops, that 4K isn't really a thing yet, and that you like to watch BBC, ITV and sometimes even Dave. The salesperson will shrug and move on to someone else. Now you're free to take a good look at the Samsung 49K5500.

The K5500 has a definite cost-cutting feel about it, but only if you compare it with TVs priced at over £1000. So don't do that. Instead, admire its smart metal quad-stand, and it's matte black frame and slim design. It's a smart, modern TV, and it will fit in well in any home. It's also surprisingly sturdy, with no wobble, and that's always a bonus if there are kids around. 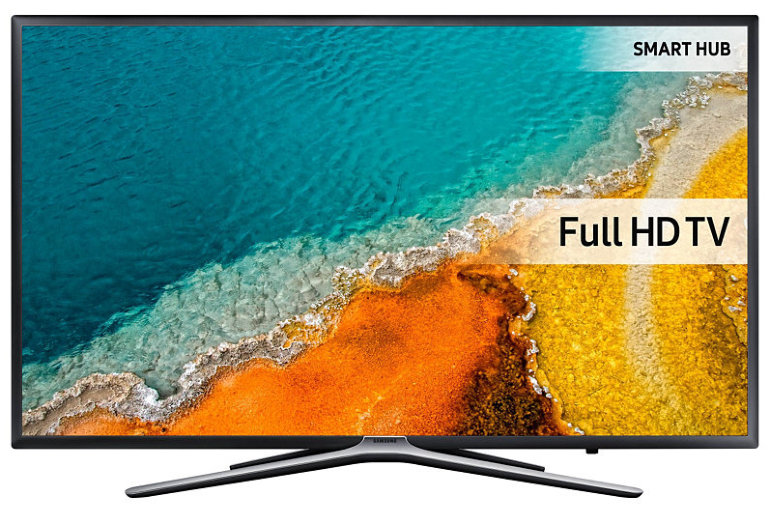 The K5500 is a full HD screen with a 1920 x 1080 pixel resolution. That's fine, because most TV is still broadcast at this resolution or below. Blu-rays play at this resolution. Amazon and Netflix show most of their streaming content at this resolution. So ignore anyone who says that you have to upgrade to 4K. HD images are nice and sharp even on a screen this big, and you needn't worry about not buying into the latest format, which is still in its infancy.

What's more important is how well the screen displays content. The answer in this case is surprisingly well for a budget TV. We're very impressed by the ability of this screen to show not only bright whites and dark blacks, but also a great deal of shadow detail. Normally this gets crushed in budget models, and often in mid-range TVs too. Yet the K5500 captures it very well, with bright well-lit scenes.

Another common problem with low-end TVs is narrow viewing angles, and again the K5500 avoids this problem. Instead, viewing angles are rather wide, so even if you have a family of four spread out in front of this big screen, everyone can enjoy good levels of contrast and bright colours.

The one area where the K5500 doesn't perform so well is in resolving motion. The 50Hz screen is slow, and motion blur can be an issue, especially when watching sport.

Not much to say here. The speaker system is typical for a low- to mid-range TV. Stereo downfiring speakers with a total of 20W of power manage to reproduce dialogue, but don't have the low-frequencies needed to add depth and realism to movies.

Samsung has updated its Tizen-based Smart TV system again for 2016, making it arguably the best system on offer from the big four manufacturers. The system is very comprehensive and easy to use, whether you're browsing the Electronic Programme Guide (EPG), Catch-up TV, or one of the many apps available, including Netflix and Amazon Instant Video.

New for 2016, the Smart TV system includes access to cloud gaming, giving you a console-like experience directly from your TV.

The quad-core processor gives a fast response, and this really is a very comprehensive Smart TV system.

The Samsung K5500 isn't lacking in connectivity. It has 3 HDMI ports, one with Audio Return Channel (ARC) compatibility for connecting to a soundbar, 2 USBs, an optical audio output, a combined composite/component input, a CI+ 1.3 slot, and Anynet+ support. It also includes built-in Wi-Fi and ethernet, and supports screen mirroring from smartphones and tablets.

The only problem you might have is that there's no SCART connection, so if you have an old DVD player or Sky box, you'll need to upgrade it.

Conclusion - one of the bargains of 2016

We don't usually rate entry-level televisions very highly, so the K5500 is a refreshing change. Yes, it lacks UHD, but Full HD has years of life left in it, and it really isn't a problem. This TV is very capable, and displays bright well-lit scenes with loads of shadow detail, and with wide viewing angles too. As we noted, the one area that lets it down is motion blur, which you may or may not notice, depending on what kinds of programmes you watch.

With a budget of £500, we can't think of a better TV you could spend your money on.

The KU5600 is exactly the same, but with a grey frame instead of black, and is exclusive to Currys / PC World.

How do you reset the TV back to factory settings?

Has the tv got bluetooth?

Asked by Davies from United kingdom on 16th Dec 2016

Reviewed by Barbara from Uk on 13th Dec 2016
Very disappointed no BBC iplayer and the internet connection is terrible. My iPhone and laptop work perfectly so there is evidently nothing wrong with my router.
Tried resetting tv numerous times. However this tv is time consuming and rubbish .
Samsung technical support do not inform you with any further knowledge then a 7 year old child could have.
I'm returning my tv to John Lewis following 8 weeks of shear frustration ...
Rating:

But IT DOES NOT HAVE BBC IPLAYER !

Buyers beware, Samsung have not released iplayer app for this TV yet , many places are listing it in the details for some reason.

Reviewed by Maggie from England on 25th Sep 2016
Tv is nice. Picture is clear. Only I am very disappointed about app. There is no bbc iplayer which supposed to be.
Rating: