Sony's X83C models share similar looks to many of the company's other 2015 TVs, in particular the X85C and W85C ranges. The ultra narrow bezel around the screen, and the flat shaft stand give the TV a contemporary, open look, but note that the metal stand doesn't swivel.

The Sony X83C series is available in three models - the KD49X8305C has a black frame and a dark chrome mirror-effect stand. The X8307C and X8309C are the same, but with different colours.

All three colour options are attractive, and will blend into any home, with their contemporary but understated looks. They are very slim televisions, and we like the illuminated Sony logo below the screen, which glows discreetly when TV functions are accessed.

The TV is reasonably energy-efficient, rated A for energy consumption. 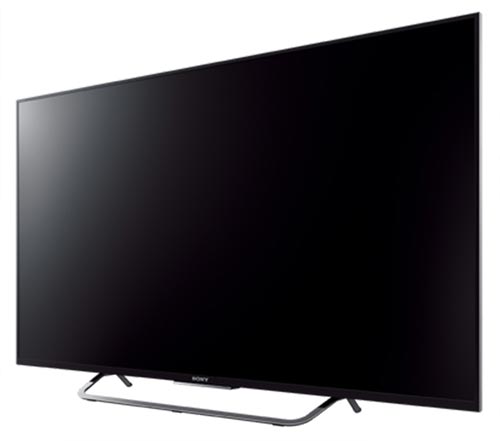 The X83C series is Sony's entry-level UHD (4K) range for 2015, and while it has some good features, it's far from being the best 4K TV we've reviewed this year.

Like Sony's more expensive 4K TV's, the X8305C uses the X1 processor to upscale content to 4K resolution, and this does an excellent job. 4K source material is pin-sharp, and Blu-Ray and other HD content is upscaled well too. Standard definition material is less effectively rendered, and when blown up to such a large screen size can sometimes appear pixellated and grainy.

Colour reproduction is reasonably good, and the picture is bright. However, the contrast levels on this screen leave something to be desired, and the screen's motion response isn't as good as we'd like either. That means that images lose sharpness and detail and the benefits of 4K are somewhat lost.

On a more positive note, the viewing angles are nice and wide, so even when seated off-centre, the picture stays bright and retains contrast ratios quite well. This makes it a good option for family viewing.

Note that 3D viewing isn't available on this model.

Although 4K viewing is a headline-grabber and nice to have, in the X83C series it's rather wasted, and we'd opt for the Sony KDL-50W805C Full HD model instead.

Audio quality is rather run-of-the-mill. The Clear Phase stereo speakers have a 10W x 2 power output, which is completely standard for entry-level or mid-range televisions. They're powerful enough to handle dialogue, but they can't produce much bass, and we'd recommend adding a soundbar or subwoofer to accompany the TV, especially if you enjoy watching films, or drama. Usefully, the headphone output doubles up as a subwoofer output, and Sony also makes a wireless subwoofer that can be added to the TV to supply the necessary bass.

One nice feature of Sony's 2015 range is its introduction of Android TV as its Smart TV system. This gives you access to the world of Google Play from your TV, so you can download apps, videos, music and other content. YouTube and Netflix are probably the best ways to access 4K content at present.

Android also provides features such as Google Cast, which lets you mirror content such as videos or photos from an Android phone. The TV SideView app lets you use your phone or tablet to control the TV.

Catch-up TV is provided courtesy of Youview. A user-friendly 7-day windback with content from BBC iPlayer, ITV Player, 4oD and Demand 5 is displayed alongside future programmes in the Electronic Programme Guide.

Note that these apps and services are rolling out during 2015 and some are still not available.

The X8305C has everything we need when it comes to connectivity. Wi-Fi and an ethernet connection are available for connecting to the internet and your home network. Wi-Fi Direct is also supported. We're pleased to see a total of 4 HDMI connections, plus 3 USB ports and a very full range of legacy AV connections, including SCART. Dual Freeview HD and Freesat tuners are incorporated too.

Compatibility with Android smartphones is provided via the Android operating system, and the TV supports MHL and Google Cast for screen mirroring.

We already mentioned that the headphone jack doubles as a subwoofer output, and there's a digital audio output for connecting to a speaker system, in addition to HDMI.

A conventional remote control is included in the sales package.

4K is grabbing a lot of attention this year, but be aware that as yet there's very little 4K content available. Most of us will be watching HD or even standard definition programmes for some while yet. For this reason, we're not completely sold on 4K. In particular, this entry-level 4K leaves us unimpressed.

There are too many compromises in picture quality to make up for the capability to display UHD material. We'd actually prefer to invest in a top-notch 1080p HD television, and save some money at the same time. In particular, we think that the Sony KDL-50W805C is a better buy. If you really do want 4K, then we'd refer you to the more expensive X85 series.

Reviewed by Soniaal from France on 3rd Dec 2017
I bought this TV late 2016 when its price came down to 700 EUR. During this period this model received several android TV updates and I can agree that with the standard color settings a lot of video sources look washed out, but after careful playing with TV the settings I managed to solve this problem. Youtube has several great solutions and examples of the perfect color settings. Now in the end of 2017, I bought my self a UHD 4K Apple Tv and I'm more than pleased that the potential of this more than 2-year-old TV model finally came to fruition. My 700 EUR turns out to be a super sale. I also installed several great Android Apps that even more extended its function as a full-fledged computer with a web browser. I give this TV a 4-star rating...
Rating:

Reviewed by Geoff from United Kingdom on 28th Oct 2017
Om the face of it a decent television when we bought it in 2015, but that is only superficial.

After living with it for 2 years we are not impressed, there have been constant issues that make it awful - sound quality using Amazon, constant rebooting when we are watching. The update to the operating system that announced the fancy multi coloured Android logo, seemed to make the reliability worse rather than better. The issues to Sony's inability to give a stable and quality operating platform

The last Sony we will buy....
Rating:

Reviewed by Steve from UK on 6th Mar 2016
The operating system is dreadful. Constant bugs, black screens loses tuned channels, slow to respond, frequently need to reset it - all this after the major Feb 2016 software update. Regret buying it.
Rating:

Reviewed by save wall from ireland on 28th Dec 2015
Total rubbish bringing back today 2 days trying to set it up. Bluetooth doesn't work only connects to a registered device such as phone that's it. Won't connect to headsets r speakers .mirror cast won't support note 4 Samsung. R 2 other phones I had. Google play is not like play store on yr phone. It hasn't got fb showbox. And all the main apps u want .just rubbish games. And lagging and slow.
Rating: