The Sony Bravia KD-55XE9005 is the first Sony TV for us to review in 2017, but it might well turn out to be our favourite, thanks to its direct backlighting system with local dimming. More of that below, but first let's just admire the exterior.

The design of the XE9005 is very attractive with a slim aluminium frame, matte black bezel and a smart brushed silver base. The screen is thicker than some, at around 6cm, because of the direct backlighting, but it's nicely finished with a black rear panel that looks a lot nicer than the more expensive XE93. The base is sturdy and is designed to hide your trailing cables, for a neat and tidy look. Alternatively the screen can be wall mounted.

The supplied remote control isn't as premium as rival offerings, but does include voice control.

A direct-lit TV with local dimming is something to look out for, so even though the XE90 sits below the XE93/XE94 models in Sony's 2017 range, it was perhaps the one we were most looking forward to reviewing. It doesn't disappoint.

Direct-backlit LED TVs have a clear advantage over edgelit models in that they avoid the cumbersome tricks required to light a screen from the side, or from below. Instead, light shines directly, as nature intended. The XE90 has a local array of LED lights capable of independent dimming. This lets the Triluminos screen display a very high degree of shadow detail, reproducing deep blacks simultaneously with bright highlights. There's no clouding or backlight bleed either. The benefits are immediately noticeable even when watching conventional images, and with HDR content it's even more impressive.

Sony's X1 processor does a superb job of displaying and upscaling UHD video, adding depth and clarity even to low-quality source material. And with HDR content it shines. While it can't quite match Samsung's premium QLED TVs, it easily beats the majority of LED screens, and performs in many ways as well as Sony's more expensive models. Blacks are deep, highlights bright, colours well saturated, and mid-tones are never crushed. The TV is capable of meeting the HDR10 spec, and will receive a software upgrade to HLG later this year. HLG support will be required when broadcasters like the BBC finally start airing HDR content.

The screen has a moderately fast 100Hz native refresh rate, and Sony's MotionFlow 1000Hz system renders movement impressively smooth and judder-free. Input lag is relatively low - good news for gamers. Viewing angles are moderate, so when viewed from the side you'll notice the colours begin to wash out, as is common with most LED displays, especially VA panels like the one used here.

The one thing missing is 3D, which has now largely been dropped by all manufacturers.

Overall, this is one of the most accomplished performances from any LED TV, and quite possibly the best for the price. 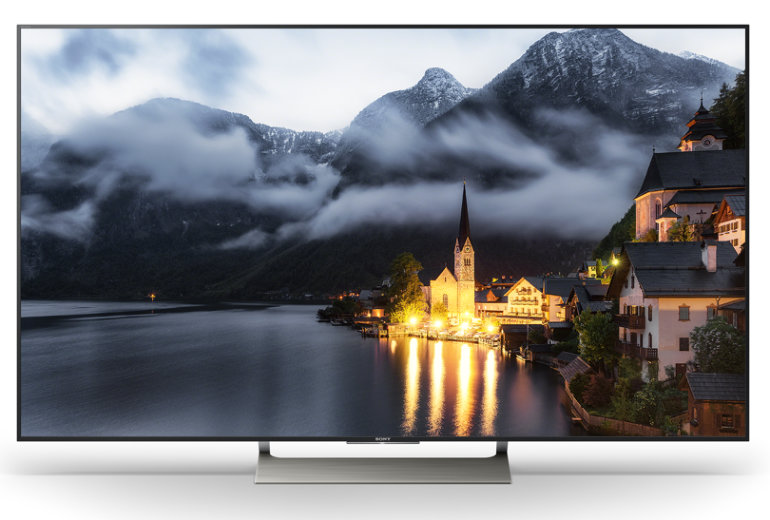 The audio spec of the XE90 range seems decidedly mid-range, with two 10W bass reflex speakers. However, the depth of the chassis does allow these speakers to reach a decent full-bodied rumble, and we'd say that the sound is certainly better than average. Like the vast majority of current TVs, however, you'll benefit from the addition of a dedicated subwoofer or soundbar.

Sony switched its Smart TV system to Android TV back in 2015 and has stuck with that decision, attempting to iron out the initial bugs and teething problems. Two years on, Android TV runs much more smoothly, and we're hoping that the system will prove to be robust in its latest incarnation.

Android TV still isn't as friendly as rival systems, but it does offer plenty of choice, via Google Play apps. Netflix, Amazon Instant Video and YouTube are available for streaming content, and you can easily access a full range of catch-up TV services too - BBC iPlayer, ITV Player, All 4, and My5.

Android also provides features such as Google Cast, which lets you mirror content such as videos or photos from an Android phone. The TV SideView app lets you use your Android phone or tablet to control the TV.

The TV connects to a wide range of AV devices, with 4 HDMI connections, ARC support, 3 USB ports, digital audio output, and component and composite connections too. The TV supports networking via built-in Wi-Fi and ethernet, and also has dual satellite and terrestrial tuners, with YouView.

The headphone jack doubles up as a subwoofer output.

The Bravia KD55XE9005BU looks like it might be the outstanding Sony TV of 2017. Although it's not top of Sony's line-up this year, its direct backlighting system with full array local dimming gives it a capability that's hard to beat. Matching that with competitive pricing, and a much improved Android operating system, this is our favourite Sony TV of the past three years, and it seems to offer better value than Samsung's 2017 range.

Whats the difference between the 49 and the 55 picture wise?

Asked by Sam lindsay from United Kingdom on 1st Apr 2018
I was thinking of buying the 49, but if theveryone 55 is better i might have to think twice.

Reply by david g from uk on 30th Sep 2017
I have read your articles seems your keen on Samsung only.
Why cant you just give a straight answer as to what is the best product
on Sale Now. 4k HDR tv 55 inch +++ Screen Budget £1500.
We are all Human and find in most cases the Manufacturers and stores pushing their products
as best.
I am to busy to understand all the Hype.
Help by Replying what you really think is the best TV Now Today for the Price ?

Reply by S21 from UK on 30th Sep 2017
The answer to your question is in that article. It's the Sony KD-55XE9005. But remember that's just our opinion. Other sites may give different answers.

Asked by david from United Kingdom on 18th Sep 2017
Hi Guys Just watch standard TV Programmes in UK
like to watch YouTube via Tablet and to use Tablet to Send smash box movies to Chromecast on my old TV.

Reply by S21 from UK on 18th Sep 2017
Hi David, sorry, but we can't respond to such detailed and specific questions.

Reviewed by david from United Kingdom on 30th Aug 2017
I recently purchased this tv but like so many people wanted to know how this tv compared to last years samsung ks7000/8000 in the usa well having now owned both tvs i can tell you that in my honest opinion if you can still get the samsung model go with that it has much better upscaling of normal tv and sky and is so much brighter also for gaming the samsung wins again better input lag and the graphics on the ps4 pro and xbox one s look much sharper and more crisper on the samsung .now onto the sony normal tv and sky looks pretty dull and bland no matter how much you tinker with the settings its the same with gaming the ps4 pro looks pretty good on the sony tv and the xbox one s looks even worse but both consoles look great on the samsung also the hdr is much better on the samsung on the sony its quite dull and not very bright overall im not really impressed with the sony xe9005 and i think for the money you pay for this tv the results should be far better.
Rating:

Reply by russ from uk on 3rd Apr 2018
Was thinking of getting this tv but after that last review starting to question it any1 else had this issue?