It's been three years since the launch of the original PS4, and it's time for an upgrade. When the PS4 launched, TVs were 1080p format, and streaming was just becoming popular. Now, TVs are 4K with HDR, and streaming is huge. The PS4 Pro caters for these advances.

Slightly larger physically than the original, with a new design, the PS4 Pro handles 4K games and 4K streaming, and is also HDR compatible.

Sony has doubled the graphics power of the console, with a new AMD Radeon GPU that delivers 1.84 TFlops of crunching power. Not only is this able to cope with the demands of 4K, but it can also increase frame rates and provide smoother action.

You'll need a HDR capable TV to make full use of the HDR feature, but if you have one of the high-end HDR TVs from 2016, this will give noticeably richer colours and highlights when compared to non-HDR sources. The console launches with three titles optimised for HDR - The Last of Us Remastered, Uncharted 4: A Thief's End and inFAMOUS First Light. More will follow.

New games launched after 10 November 2016 will be able to run on both PS4 and PS4 Pro, and will be able to take advantage of Pro capabilities when run on the new console. Older titles may be upgraded by a downloadable update. 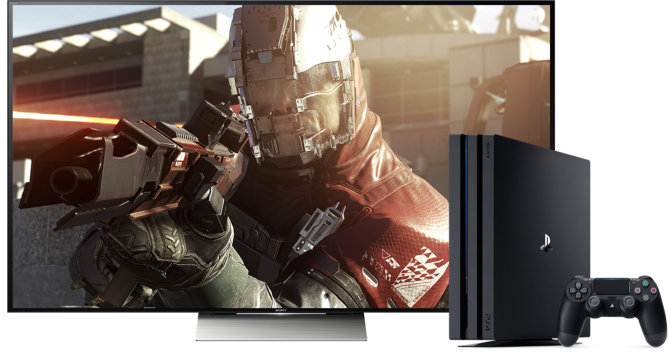 One disappointing feature is that the PS4 Pro doesn't support UHD Blu-Ray disks.

Should you buy it?

If you own a 4K TV, there's a very obvious case for buying or upgrading to the Pro. All your existing games will work, and you'll be able to unlock the full potential of your TV. Even if you don't own a UHD TV, the PS4 Pro will still work with it, and will give you faster and smoother frame rates, and potentially more detailed modelling of characters and effects. So if you plan to upgrade your TV in the near future, the PS4 Pro might still be a worthwhile upgrade now.

If you upgrade from a PS4 to PS4 Pro, you'll be able to copy your games, saved data, captured videos and screenshots, system settings, and other content from the PS4 to the PS4 Pro using an Ethernet cable.

On the other hand, we're disappointed that UHD Blu-Ray isn't a feature in the PS4 Pro. If you've already switched to streaming, that might not be an issue for you, but UHD Blu-Ray still delivers the best quality movies and video you'll find anywhere. If UHD Blu-Ray is on your radar, perhaps this is the time to switch to the XBox One S.