Sony's E-series phones have moved steadily upmarket, from the clunky early models to the very smart-looking Sony E5. The price has tracked upwards too, but for around £150 - £180 we don't think that the E5 is over-priced.

With a 5-inch screen, the E5 is averagely sized for a mid-range Android phone, but is a lot slimmer than most, measuring just a hair over 8mm thick. While Samsung has recently moved to a metal frame with it's 2016 version of the Samsung J5, Sony has stuck with polycarbonate. Available in Black or White, the look is sleek and smart, with styling to match the recently-released Sony XA. It's a flat, rectangular phone with a practical matte finish, and with discreet power and volume controls along the edge (no camera button however.) Weighing in at 147g, it's a phone that feels solid without being too heavy. 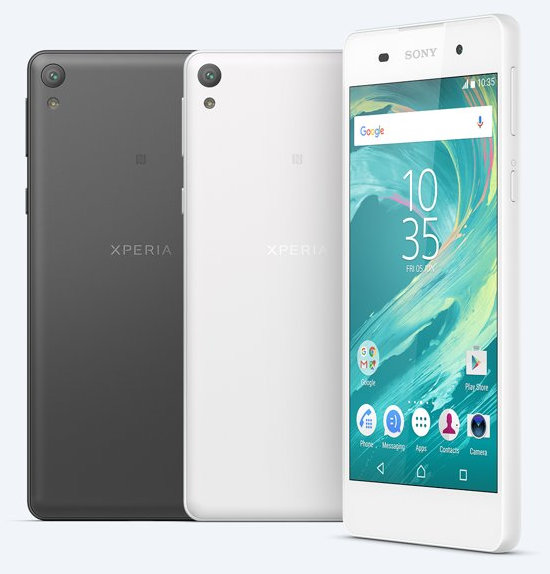 The scratch-resistant 5-inch screen is a good size, and it's HD too, with a decent pixel density of 294ppi. That's exactly what we'd expect from a phone costing £150. The screen is IPS, and is bright and clearly visible outdoors.

We're pleased to see that Sony has launched the E5 with the latest Android Marshmallow, version 6.0. Sony's user interface mods are restrained and for the most part helpful. The UI includes helpful tips to enable you to get the most from the phone - a useful feature with Android.

Instead of the more usual Snapdragon processor, you'll find a MediaTek MTK6735 processor at the heart of the Xperia E5. This is equipped with an ARM Cortex-A53 64-bit quad-core processor running at 1.3GHz, and an ARM Mali-T720 GPU. The system has 1.5GB of RAM available.

We wouldn't say this is a particularly fast set-up, but it's enough to power the E5 without any glitches or hold-ups. You might have to wait a while for apps to open, and high-end games aren't recommended, but general performance is reasonable for a mid-range phone.

There's no problem with storage of apps, music, videos, etc, as 16GB of flash memory is available, plus a microSD card slot, enabling you to add up to 200GB of additional storage.

The standard camera set-up for a mid-range phone in 2016 is a 13 megapixel rear camera and a 5 megapixel front camera. It's no surprise to find that this is precisely what Sony has given the E5.

Performance is generally good, especially in daylight, with features like HDR, flash and face detection to ensure your pictures turn out as well as can be expected. The Auto Scene Recognition feature makes it easy to just point and shoot. 1080p video recording is available from both cameras too.

The E5 comes with a solid set of connectivity options. 4G, 3G and 2G networks are catered for, plus dual-band Wi-Fi, Bluetooth, NFC, GPS and USB support. A headphone jack is also included.

Sony's E series phones have usually given solid battery life, and the 2700mAh battery of the E5 is a good size for a phone of this spec. But the battery life isn't quite as good as the specs suggest. Use the phone with moderation and it's good for a day between charges. Sony's STAMINA Mode can extend this further by shutting down non-essential functions if the battery charge gets low, but battery life isn't really a standout feature of this phone.

We've decided to call the Sony E5 a safe choice. It's not an exciting choice; it's not revolutionary or pushing at any boundaries. Nope, but it's very safe.

The camera seems very grainy at the 13mp setting , has anyone got any ideas how to resolve this?

Asked by dave from uk on 19th Aug 2016
We used the standard setting straight out of the box.

Reply by Steve from UK on 16th Nov 2016
I would try playing with the settings a bit- Sony phones usually have pretty good cameras. Not got one of these, but if you look for other reviews, several of them show some pretty sharp, clear pics they've taken with the E5, so i guess it must be capable of taking good pics. In fact I might be getting one this weekend as a work/spare phone (toss-up at the mo between that, an Honor 5C or a Moto G4 Play). If I get the E5 I'll let you know what the camera's like on different settings by posting here, ok?

Reply by Steve from UK on 20th Nov 2016
Ok, so I got one. Tested the camera with night shots on 13mp using the flash- 2 pics, which both turned out clear & sharp, in fact as good as any camera. Not yet taken any daylight shots though.

Reviewed by Amos from Zimbabwe on 20th Mar 2017
Got one of these from the UK, it does what it says on the box. Everything runs well, I'm a light user so I get 4 to 5 days between charges. The user interface and thought Sony put into how the phone works is impressive.
Rating:

Reviewed by richard ciark from england on 10th Jan 2017
Easy to use great phone pleased with it with every task used.
Rating:

Reviewed by Steve from UK on 20th Nov 2016
Got this phone yesterday at Carphone Warehouse, & put my Three sim in it, as a workphone replacement for my LG Leon, which disappointed me with its fast battery drain & slow (2-3 hrs) charge. The E5 is a far superior phone- fast charge (1-1 1/2 hrs), slow drain, very sensitive touch screen, fast connections & typing, just like the older Sony Ericsson phones I'd had in the past. Excellent HD screen too, & good speaker. & the camera is as good as an average compact camera. All in all, well worth the money- £109 plus Vodafone £10 sim, but I'll sell the sim on unused.
Rating: