In a nutshell: The Storm is a mid-range phone from new British smartphone maker Wileyfox. Priced for value, the Storm gives you a large 5.5 inch screen, an 8-core processor, loads of memory and a 20 megapixel camera. Unusually, the Storm runs the Android-based Cyanogen OS. It's a good all-rounder for anyone willing to take a risk and try something new.

Wileyfox is a new smartphone company, and it's British. Sign us up already! But wait, can the plucky Brits really take on the world's smartphone giants and win? Wileyfox has launched two handsets initially - the Storm and the Swift - and the Storm is the more expensive model. Let's take a look at it in detail.

The Storm is a large handset with a huge 5.5 inch screen. It's not particularly heavy for its size, although with a width of 9mm it's a little on the bulky side. This is clearly a phone that's out to attract power users.

The design of the phone is pretty conventional, and at risk of looking bland, although the Wileyfox logo on the rear of the phone may attract some attention, and the unibody design seems well engineered. The phone is available in Black only. There isn't anything to dislike about the appearance of the phone, but it's not going to appeal to the design-led crowd. Those people would do better to stick with one of the big brands.

The main feature of the phone in terms of its external design is the very large 5.5 inch display. This is one of LG's IPS screens, with moderate brightness, and offers a high resolution of 1920 x 1080 pixels, giving 400ppi. That's plenty of pixels, but at this price point it's nothing to shout about. It's a match for the slightly cheaper Honor 5X phone from Huawei for example. The screen is protected by Corning Gorilla Glass.

This is where things get different. Wileyfox has taken the brave step of releasing its phones with the Cyanogen OS installed. Cyanogen is an open OS built on top of Android. The current version 12.1 is built on Android Lollipop 5.1.1.

Cyanogen is designed to give users greater customisation, performance, security and privacy than standard Android. If you've used Android before, you won't find Cyanogen too much of a learning curve. 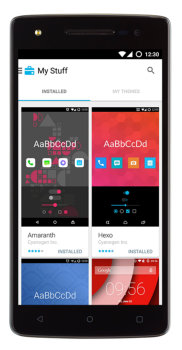 The Storm runs with a Snapdragon 615 processor, which is a decent mid-range 8 core model running at a maximum clock speed of 1.5GHz. An Adreno 405 GPU supports 3D graphics. It's a decent processor for a device priced like the Storm, and is capable of powering everyday apps without a hitch, but it lacks the grunt of high-end phones.

Memory, on the other hand, is very generous, with 3GB of RAM and 32GB of built-in storage. You can also add a microSD card to add an extra 128GB of storage. That 3GB of RAM certainly helps when multitasking and switching between apps.

The Storm uses Sony Exmor cameras, and they're better than many rivals. The rear-facing camera uses a 20 megapixel BSI sensor and is capable of capturing some good shots, although they tend towards the grainy end when enlarged, like many phones that use Sony cameras. The camera includes standard features like autofocus, HDR, geo-tagging and a range of filters.

The camera also shoots 1080p HD video, and can capture slow-motion video too.

The front camera has an unusually high 8 megapixel resolution, and has the benefit of a flash too, making it ideal for capturing late night selfies in all their gory detail.

The Storm is a 4G phone, and can accept two sim cards - a micro Sim and a nano SIM. The number of 4G bands is relatively limited (LTE 800, 900, 1800, and 2600) but there's also support for 3G HSDPA and quadband GSM. It also supports single-band Wi-Fi, Bluetooth and USB, although there's no NFC functionality, which is a surprising feature to miss out.

The Storm doesn't have a particularly large battery for a phone of this spec. It's a 2,500mAh battery and is non-removable. Standby time seems reasonable, but heavy use will drain the tank quite quickly.

At S21, we very much welcome the arrival of a new player in the smartphone market, especially a British company, and one that has already shown itself to be brave and innovative. We wish Wileyfox every success. Yet we can't find it in our hearts to give the Wileyfox Storm more than 4 stars.

Although the Storm is the company's high-end product, it's still not very expensive, and costs about the same as phones like the Sony Xperia M5, Samsung Galaxy S5 Neo and Motorola Moto X Play. Each of these rivals offers something distinctive, so the Storm has a hard job to make its case, especially when there are even cheaper phones like the Honor 5X vying for our attention.

But the Storm does offer Cyanogen as a selling point, and it's a good all-rounder with a very generous amount of memory. For anyone wanting to try something new and different, we think it's well worth taking the chance.